The Romina Theatre
By Reno Bailey

When we last reported on the Romina Theatre in Forest City, its owner, Walter Haynes of Cliffside, had just held its grand opening in January 1929. Here is some of its history since that time.

Around 1933 Haynes sold the theatre and the building itself to James Willis Griffin and his wife Alice Grace. Mrs. Griffin operated the Romina for close to two decades. They also owned, and Mrs. Griffin operated, the Grace Theater across the street (which had once been Horn’s Theater).

Toward the end of WWII, one of their children, James W. Griffin, Jr., who was in service, drew up a set of plans for a new theater in Forest City.

Junior’s two children, Jimmy (James W. Griffin, III) and Melinda spent many hours in and around the Romina. Melinda remembers sometime in the ’40s seeing western stars Bob Steele and Gabby Hayes in stage shows. She recalls her how grandmother, for whom the Grace Theater was named, would busily go back and forth across Main Street to attend to the business of both theaters, collecting the receipts and taking them to the bank. Her grandmother always carried a pistol in case someone might attempt to rob her.

When James Griffin, Jr. returned home from the war, he unrolled the plans he had drawn up and built a new movie house about five blocks up the street from the Romina, naming it the Griffin Theater. It opened in 1948. Most of us remember the Griffin for its superior comfort and style. It even had a “crying room” in the balcony, where mother’s with young children could sit without disturbing other patrons.

The Griffin remained in service until the summer of 1972, a run of 24 years. Down at the mall on the bypass a new air-conditioned Cinema had opened. On the Griffin’s last day the words “The End” were displayed on its marquee.

Meanwhile the Romina had been closed down, remodeled, and rented out as commercial space. The Grace also closed and the building came to house The City News.

The Romina building remains on Main Street, still owned by the Griffin family and houses, as of this writing, a rental company.

With Jimmy Griffin’s permission, and accompanied by Bob Elliott and Myles Haynes, Jr., we took a tour of the building—seeking any visible remnants of the old Romina. We weren’t disappointed.

When the Romina was shut down the seats and most other fixtures were removed from both the sloping balcony and main floor of the theater. Then, an interior structure was constructed within the building’s shell, a level rectangular box with it’s own walls, ceiling and floor. All subsequent tenants, including an Eagle’s Dime Store, have occupied this “box.” Meanwhile what’s left of the theatre exists both above and below the box.

Here is the Romina in 1937. It was a “first run” theatre, always booking the latest movies. The signs hanging from the marquee are advertising “Top of the Town,” a Universal Pictures musical starring George Murphy and Doris Nolan. It was booked for Monday and Tuesday, June 14 and 15.

The popcorn machine was outside the theatre at the entrance. At the left of the theatre entrance, with its own awning, is an establishment you may remember, Jigs’ Soda Shop. In the ’40s Phillip White’s mother worked at Jigs’. (It later became Bo’s Snack Shop.) Young Phillip would often be in the vicinity and would earn spare change by helping the projectionist carry the heavy film cans, left on the sidewalk by the early morning Trailways bus, upstairs to the projection booth.

It was at the Romina that Phillip came to love westerns and the Saturday serials. Read more of his reminiscences here. As many of you know, Phillip grew up to become a school teacher, and has been principal of Cliffside School since 1969.

And here’s the exterior of the building today. Over 65 years later, the old marquee is gone and cars and shoppers are far fewer in downtown Forest City. This was taken around 11:00am on a weekday. 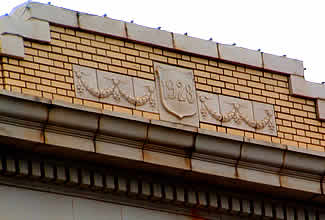 At the top of the Romina building is something only the pidgeons might notice. Architects may have a special name for this feature. We’ll call it a date ornament for it proclaims the year it was built: 1928.

Go to the back of the current tenants space, ascend a narrow flight of stairs and you are in the top of the theatre (standing on top of “the box”), over the main floor audience. Some of the stucco has been removed and the brick behind it is exposed. The curved “proscenium arch” was an elegant feature that outlined the film screen and the stage on which entertainers often performed. 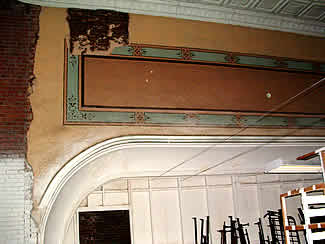