Home » The County » Dr. Ben Washburn » To Every Thing A Season

Before the introduction of modern water and sewage systems and of electric lighting, Rutherfordton was dark, dirty, and insanitary. Each home had its open well, with rope and bucket, and the water had to be drawn by hand. Many families kept one or more horses and a cow or two in barns in the back yard, and usually there was a hog pen and always a filthy open-back privy. As would be expected, flies were abundant during warm weather and the death-rate from bowel complaints in babies and dysentery and typhoid fever in adults was alarming. It was before the advent of preventive medicine and such diseases as diphtheria, whopping cough, smallpox, and tuberculosis caused so many deaths among children and young adults that they were regarded as veritable plagues. 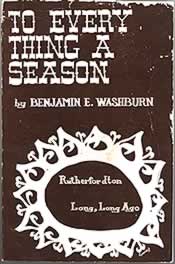 It was almost necessary to keep a cow since neither fresh milk nor green vegetables could be obtained in the stores. Milking and caring for the cow and staking her out to grass was the job of the young boys of the family. For some reason my folks always had muley (polled) cows; these I would drive from our home on Washington Street to the grass plots along Cleghorn creek, behind our store. My difficulty was not in getting across the bone yard or Main Street; but in going down the steep hill to the creek; it was here that the muley invariably ran away and pulled me after her.

Drawing water was another job that fell to the boys, since the wells were deep, the town being situated on a high hill. On hot days it was one of my chores to carry a bucket of cool water to the store every hour or so. Mrs. Mary Carson, our next-door neighbor, had a well with unusually cool water and it was a custom of the merchants to send their clerks, or hire a boy on busy days to bring water from this well. Judged by present day standards, such a water supply could not have been very safe, especially with the added danger from the use of an open bucket and a common dipper. But it was the houseflies which were the scourge of summer days. These bred in myriads in the horse and cow manure and in the hog pens and the garbage piles in back yards. There was frequent debate as to why God made flies; some thought their purpose was to annoy man in case he should become proud of spirit, but one of the town’s doctors explained that they ate ordure and thus diminished the smells from privies and stables. None of the houses was screened and various contrivances were devised to frighten the flies away from the table during mealtime. Old newspapers were draped and stiched about small sticks and the paper cut into narrow ribbons, so that when the stick was shaken the noise would scare the flies away. One person would stand and wave this fly-bush over the table while the others ate. At hotels and cafes and in homes with large families a more ambitious contrivance was made by fastening four cords to the ceiling above the corners of the table; to this was tied a wooden frame from which numerous paper streamers were suspended. This apparatus was kept in motion by having a servant stand nearby and pull a connecting cord back and forth during the meal, in much the manner an Indian punkah is operated. Cheese cloth or net, when it could be obtained, was draped over the baby’s cradle to keep the flies from molesting him and it was the habit for everyone to go to bed early in the summertime since the flies made sleeping impossible after daylight in the mornings.

The cleaning of the privies was always a problem. There was no systematic or municipal cleaning of these filthy outhouses and each family had to look after its own sewage and garbage disposal. At least once a year, and oftener if the family was large and the space underneath the seat became filled with excrement, a trench would be dug behind the building and the refuse pushed in and covered with earth. it was often difficult to get this job done and often, as a last resort, someone of the family had to do the cleaning when conditions became intolerable. Other disadvantages of the open privy were the discomfort of using it during the cold rainy weather of winter and the annoyance of flies when it was visited in the summertime. Privies were often located too near the wells and in some cases undoubtedly led to pollution of the water supply.

As would be expected, sickness was rampant in the town. Typhoid fever was a common cause of death; one summer two sons of Rev. C. B. justice, both grown young men, died of the disease within a few days of each other. Of children’s diseases diphtheria was the most dreaded; it caused a horrible death by choking in more than half of its victims. And of those who survived, many were left crippled because of paralyzed muscles. When this Scourge descended on the home of Dr. Lynch, the dentist, three of the children died within a few days. But the most feared of all the contagions was smallpox, which had been a veritable scourge in the years immediately following the Civil War when, according to reliable report, one out of every two persons carried scars of the disease. At that time it was so much dreaded that a law was enacted forbidding the burial of a smallpox victim in a public graveyard or within 300 feet of a public road, it being feared that the disease might be caught by passing the grave. And when a case occurred in town, the street was barricaded so traffic could not pass the house. Strange to say, vaccination was considered more dangerous than smallpox and was not often resorted to as a preventive agent; tales were current of arms that had come off as a result of it. Tuberculosis, another dreaded disease, took its toll of lives from some of our more important families. Certain houses were thought to be breeding places for the disease and were shunned. The doctors advised that such houses should be burned, since the workmen might become ill from handling the lumber while they were tearing the place down.

Before the coming of electricity, lighting in Rutherfordton was altogether from kerosene lamps. In order to give efficient service these had to have regular care. The large lamps with round burners used in the stores gave off heat as well as light and were disagreeable in hot weather. Hand lamps and lanterns were much in use. The use of kerosene in the homes led to many cases of burns from the careless use of oil in starting fires and in lamps being filled while still lighted. At one time it was thought that an explosive gas was generated in the bowl of the lamp. This led unscrupulous peddlers to go from house to house selling small packages of what turned out to be colored sand. This coarse powder was to be poured into the lamp in order to prevent the formation of gas and a possible explosion. To prove its effectiveness, the seller would take a small can of kerosene into which the sand had been placed and plunge a lighted match into the oil. The fact that the match was extinguished was considered as proof of its effectiveness.

Printed with permission from the grandson of Dr. Washburn, John W. Pike.