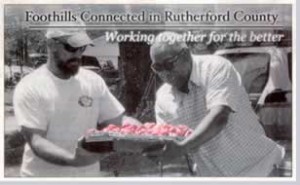 And with each new success by the Foothills Connect staff, more people are taking up this different approach to agriculture.

The stereotype of a farm as a large acreage requiring expensive equipment is being shattered. The Foothills Connect message is that the future of farming lies in intensive cultivation of small tracts of land to grow specialty crops for a specific market.

Will saw an opportunity when he realized that Charlotte chefs need fresh food, and the land in Rutherford County was ideally suited to meet that need.

“When we at Foothills Connect saw the anomaly that there were thousands of rural families that owned between five and 20 acres of potential high intensity horticulture growing land and that the chefs in Charlotte found it very difficult to get reliable fresh and local food sources, it seemed to the board and staff an opportunity, a plum ready to be plucked,” he said recently.

Many people wanted to believe that the large metropolitan area of nearby Mecklenburg County could be a source of revenue, because farming runs deep in Rutherford County.

Even though many county residents enjoyed working in a textile plant because of the job security and the camaraderie of their co-workers, it was hard to totally give up farming.

So mill workers frequently farmed on the side, either coming home after working first shift and farming until dark, or else working on the farm in the morning and then going to a second-shift job at the plant.

It comes as no surprise, then, that Rutherford County wanted to embrace the Foothills Connect message that it is still possible to farm the land and make money at it. But people waited and watched to see if Will could deliver on his plan to sell food to Charlotte.

The trend for years has been to give up farming and sell the land for development because of skyrocketing land prices.

A Rutherford County land use plan developed by the Isothermal Planning and Development Commission, for example, indicated that total farm employment decreased by 14 percent between 1987 and 1997.

“We found a certain amount of skepticism over the concept of ‘just in time delivery’ of vegetables to Charlotte,” Will said. “One hundred years ago, when farming was king in the region, Charlotte was not what it is today, the second largest financial services market, housing the second and sixth largest banks in the country. Rather, it was a crossroads.

“Furthermore, the extensive state highway infrastructure did not begin until the early ’60s. So there were concerns as to transportation to Charlotte that just did not turn out to be a real issue. Our first truck driver was a contract deliveryman who was returning to Charlotte empty.

No interstate highways run through Rutherford County, but interstates 40, 26 and 85 are close enough to be practical conduits for farm produce bound for larger markets.

In addition to redefining farming, Will also had to redefine “fresh.”

Because a large proportion of the fruits and vegetables consumed travel an average of 1,500 miles to market, “fresh” became more of a joke than a guarantee. Will told the Charlotte chefs he could deliver crops that were still wet with that morning’s dew.

“A more serious issue (than transportation to Charlotte) was that rural people in general thought that to farm they needed hundreds of thousands of dollars in equipment to start farming,” Will said. “Under the current methodology of agriculture that is so fossil fuel dependent, this may be true, but in the sustainable, small farm agriculture that Foothills Connect is promoting, the key is soil management and high intensity.

“By way of comparison, in the 2005 USDA statistics, the output of farmland per acre was $102. That was because, in the aggregate, 80 percent of the local farm activity was grass-fed cattle related, a low intensity farm activity.

“Various high intensity horticulture models exist that show results of $8,000 to $30,000 per acre returns by changing the methodology and converting to specialty crop horticulture.

“Secondly, these types of productivity occur only when the microorganisms in the soil that literally feed the roots of plants the nutrients they need are provided with an environment that they can thrive within. In most cases, fossil fuel based chemicals applied to crops either as fertilizers, pesticides or herbicides destroy that environment. With a healthy environment, a much higher density of crop can be grown in a smaller amount of land.”

So Will has had to spread the word that he is talking about a different kind, of agriculture.

In April of 2007, five gallons of strawberries were sent to Charlotte chefs–as a first installment on what would become a fast-growing market. Charlotte chefs have walked in the fields of Rutherford County and talked to farmers about their practices.

The farmers produced the crops, and the chefs bought them.

The Foothills Connect efforts have even drawn the attention of government leaders in Raleigh.

Agriculture Commissioner Steve Troxler came to Rutherford County in May of this year to see what was happening.

In a May 20 letter, Troxler wrote:

“I am especially pleased with your work in the area of agriculture and encourage you to continue expanding in that area as the opportunities arise. Connecting the local farmers with their fresh produce to the chefs in the nearby areas is a win-win for all involved. I recognize that you are also providing a great service to the farmers by offering instruction in sustainable methodologies, which will improve practices and help the farmers and the environment.”

In June of this year, Foothills Connect expanded on its marketing in Charlotte. A farmers market on the square at Trade and Tryon streets, called the Center City Green Market, is providing another opportunity for Rutherford County produce to be purchased in Mecklenburg County. Kirk Wilson, Foothills Connect’s Farm Fresh manager, said 23,000 people a day walk by the market.

County residents also have a chance to buy the produce grown by the Foothills Connect farmers. The TriCity Tailgate Market is open at the mall in Forest City on Saturdays.

People who once doubted that Foothills Connect could deliver are becoming convinced that there is a future in farming.

“We have just graduated 120 people from the Foothills Connect Sustainable Horticulture School,” Will said. “Our student laboratory is across the street from the post office in Rutherfordton on Court Street. Every week we counsel several people that have made the decision to create a small business called a farm.”

“Isothermal Community College and the local Workforce Development program have expressed interest in partnering with Foothills Connect to send dislocated workers through the class.”

At its June meeting, the AMA adopted a food policy based on reports of the AMA’s Council on Science and Public Health on sustainable foods: “Locally produced and organic foods are considered part of a healthy, sustainable food system for many reasons. They reduce the use of fuel, decrease the need for packaging and resultant waste disposal, preserve farmland, and/or support a greater diversity of crops. The related reduced fuel emissions contribute to cleaner air and in turn lower the incidence of asthma attacks and other respiratory problems. Organic meat production helps reduce the development of antibiotic resistance, as well as air and water pollution. Organic and local foods can have improved nutrient profiles: ripe produce, and some organic produce, contain peak amounts of micronutrients and phytochemicals, and pasture-raised, grassfed animals produce leaner beef, and meat and milk with higher levels of beneficial essential fatty acids such as omega-3s.6. Some people also believe local and organic foods taste better, which may encourage increased consumption of fruits, vegetables and lean meat, while also decreasing exposure to pesticides and hormones. Shorter supply chains in local food systems also lessen their vulnerability to food contamination.”

With interest in fresh, locally produced food growing from the local to the state to the national level, Foothills Connect is riding a wave of determination to return to the land.

In Part 6: Entrepreneurship offers a way or people to create their own jobs. And much help is available for those who want to try their hand at starting a business.