Home » The County » A Business History: Boom and Bust » Other crops 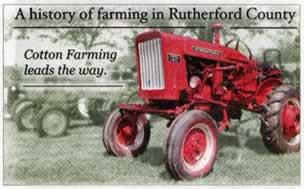 FOREST CITY – Cotton was king of cash crops in Rutherford County, but other crops had their shot at glory during the 20th century.

During the 1920s and 1930s, Ellenboro grew and stored thousands of pounds of sweet potatoes. And in the 1960s, peppers for pimento cheese and other food items were grown in the county.

It is impossible to speak of agriculture in Ellenboro without talking about A.B. Bushong, a teacher of vocational agriculture at Ellenboro High School.

Here are excerpts from a story that ran in the Forest City Courier on Sept. 3, 1936:

"Stimulated by the organization of the Ellenboro Sweet Potato Storage Company, a farmers cooperative, resulting in the building of sweet potato curing houses with a total capacity of 20,000 bushels. Sweet potato growing within the Ellenboro community has increased from a few acres planted in 1926 for home use and a few bushels for sale to more than 200 acres planted annually to give local people all they need for their tables almost during the whole year and thousands of bushels for sale.

In the book "American Cooperation, 1941" Bushong noted that a fifth curing warehouse was added in 1938, bringing the total capacity to 25,000 bushels.

He added, "Each year after the business activities of the year are completed the association holds a banquet or jamboree for its 140 members and their wives. This is free to all members and a good social time is enjoyed by all."

Retired Chase High School agriculture teacher Chivous Bradley recalls another cash, crop that thrived for a while in Rutherford County.

"Before I bought this place (on Dark Corner Road) it had been a cotton farm and they went from cotton to pimento peppers. That lasted probably eight or nine years.

"It was a good area to grow peppers. Rutherford County, the soils are suited for pimento pepper production and cucumber production, too. During that time there was a little bit of a transition to those two crops. But it didn’t last too awfully long because that is labor intensive."

The pimento pepper is a variety of large, red, heart-shaped chili pepper.