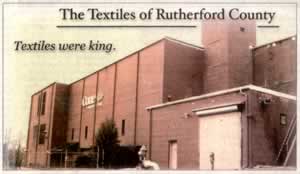 FOREST CITY – “So in the last twenty years I helped largely to build Henrietta and Caroleen Mills, built both the Florence at Forest City and the Cliffside Mills and town entirely.”

That sentence, written by Raleigh Rutherford Haynes in a July 20, 1908, letter to his children, symbolizes the enormous changes that took place in Rutherford County at the end of the 19th century, and the beginning of the 20th century.

Rutherford had commenced its journey from being a county of almost exclusively small farming communities to becoming highly industrialized. And the major industry was to be textiles.

“Back in the 1800s there was something that changed farming,” said Wilbur Burgin, director of the Rutherford County Farm Museum in Forest City, recently. “Here in the county a man by the name of Raleigh Rutherford Haynes, he and his brother went to South Carolina and learned how to grow cotton.

“And they came back and got the farmers started raising cotton. Now they had a cash crop. Up until then they still farmed, they raised a lot of things, but they didn’t have any cash crops because it was too far to haul fruits and vegetables.

“And at the same time, Mr. Haynes and a man in Rutherford by the name of Bobo Tanner Sr. were able to get the financial backing to start textile mills. And they built five of them in the late 1800s, mainly on the river — Caroleen, Avondale, Henrietta, Cliffside and the one across the street (from the museum on Depot Street), Florence. That was the last one. It was built in 1895. Now farmers didn’t have to sharecrop anymore. They could go to town and get a job in the mill.”

Raleigh Rutherford Haynes was born June 30, 1851, in Ferry, in Rutherford County. At the age of 20, he went to Union County, S.C., to learn about the cultivation of cotton. Then he returned home and began growing cotton.

Haynes, since 1885, had been buying up land along the Second Broad River in an area known as High Shoals in anticipation of putting up some sort of mill.

A Dec. 21, 1977, article in the Forest City Courier-Sun reports that Haynes owned the land at the High Shoals site, but it was Simpson Bobo Tanner and others in Charlotte who put up the capital (in 1887) to start the Henrietta Mill. The five to six years of construction of the mill was largely overseen by Tanner, the article reports.

Henrietta Mills No. 2 in Caroleen was started in about 1895. It, too, was a joint venture between Haynes and Tanner.

In 1892 Haynes and some associates bought a mill on Depot Street in Forest City. Mrs. Grover C. Haynes Sr. of Cliffside, in her book Raleigh Rutherford Haynes: A History of his Life and Achievements says that the small yarn mill could not be operated profitably, so it was torn down and Florence Mill was built on the site in 1897. It was named Florence after Haynes’ eldest daughter.

But Haynes wasn’t through yet. He then built Cliffside Mills, which was put into operation in 1902.

Paternalism has a largely negative connotation today, but at the turn of the 20th century, the principles of paternalism were aimed at helping workers. Mills at that time were often built in remote locations. Since workers didn’t have transportation, nearby housing was essential, as was provided for all the other needs of employees. Mrs. Grover Haynes writes, “In the building of Cliffside Mills and the town of Cliffside, there was ever in the heart of R. R. Haynes a vital interest and concern for the welfare of the employees.”

For example, at the beginning of the mill, one end of the plant was used for a school. When the company’s store building was erected, the school was moved there. Later, a schoolhouse was built.

Cliffside had physicians for workers and the mill helped build churches. Haynes even organized a bank and a band during his lifetime.

The mill management established three branch stores in addition to a main store. Mrs. Haynes reports that the stores sold goods to the employees at unusually low prices.

And she added, “The cottages were rented to the people at such a low cost that it proved to be a real and practical blessing during slight depressions.”

Mules hauled the gingham-making machinery to the plant and then hauled the first gingham out of the plant. Several years later, a three-mile spur line railroad was built to connect the mill to the Seaboard Airline Railroad.

In 1916 work started on the Haynes Mill at Avondale.

Haynes, in failing health, had gone to his winter home, Avondale (thus the name of the Rutherford County mill town), in St. Petersburg, Fla., where he died on Feb. 6, 1917. Mrs. Haynes reports that more than 3,000 people attended his funeral at Cliffside Baptist Church on Feb. 9.

Jim Goode was a 52-year employee at Cliffside, and he said he was inspired by Haynes.

As Goode told the Forest City Courier in 1955, “It has been a privilege and an inspiration for me to have been associated with Mr. Raleigh Haynes and the organization he helped found. In my mind, he was one of the greatest men Rutherford County and North Carolina has produced. There are few people in Rutherford county who have not benefited either directly or indirectly from the good works of this man. He was interested in people and oftentimes would sit down with his employees and talk. From our conversations came good, sound advice, which has helped me through many difficult times.”

In a 1923 special edition of The Sun, a Rutherford County newspaper, Clyde R. Hoey said of Cliffside, “Seven thousand five hundred bales of cotton are used yearly, and seventy thousand yards or 40 miles of gingham are turned out daily. The mill does its own coloring and finishing and the product is ready for the jobbers when it leaves the mill. Two classes of gingham are manufactured, the Cliffside, a staple gingham, and the Haynes, a standard.”

In a Special Textile Industrial Edition, on Feb. 21, 1917, the Charlotte News reported of Tanner, “He takes a very vital interest in the welfare of those whom he employs and as a result of this bent of mind there has been wrought in his mill villages much good and lasting work.” The article cites such things as health and sanitation efforts, home beautification endeavors, educational facilities and the fostering of morality.

The article reported that the two mills at Henrietta employ 1,300 operatives.

Likewise, the Dec. 21, 1977, article in the Forest City Courier-Sun, citing Tanner’s biography, “Southern Industrialist,” notes, “Drinking, disorderly conduct, gambling, profane swearing, prostitution, promiscuity of any kind in fact, was cause for banishment from employment and consequently from the village. Since the peace officers were employees of the company, the company regulations had the force of law.”

The Henrietta, Caroleen, Avondale Woman’s Club reported in “Rutherford County 1979: A People’s Bicentennial History,” that an early worker at the Henrietta mill remembers working for 40 cents a day. A young sweeper made 25 cents a day and one woman’s father said he worked for 75 cents a day. The work day, they report, was from 6 a.m. to 7 p.m. with a 45-minute lunch break. Any down time of five minutes or more had to be made up.

The work was hard, but many mill employees recall a sense of camaraderie and fun as well. The Woman’s Club article reports that one new worker was told she would need to move one of the looms to make room for cloth. She tried but, of course, couldn’t move it at all. The regular hands gathered to watch the new girl try to move the loom.

Herman Jones, who started at Cliffside in 1951, told a Daily Courier reporter recently that he started out at 97 cents an hour “running what they called a dye kettle, dyeing cotton. Some jobs paid less and some might have paid a little more.”

He recalled that when he was there the plant ran three shifts, except in the draw-in room, which ran only one shift. He said the plant had more than 1,300 employees at one time, in finishing and manufacturing.

After Haynes’ death the Cliffside plant was retooled, changing from gingham to the production of terry towels. In 1974, Cone Mills opened a denim factory at Cliffside.

A Wikipedia article about Cone Mills reports that Cone acquired Cliffside Cotton Mills, a manufacturer of terry cloth, and Haynes Plant, a producer of chambray, in 1927. The article reports that Moses Cone was called “the Denim King,” so it is no surprise that the Cliffside plant eventually went to denim production.

Haynes had been friends with the Cone family since the 1880s, Mrs. Grover Haynes reported in her book.

As economic conditions changed in the country, the need for a mill village began to wane.

At the Henrietta Mill, the 1977 Courier-Sun article said, the company store was closed in 1948 and the company-owned houses were sold in 1958.

Martel Co. bought the Henrietta Mill in 1927; Burlington Industries bought it in 1957.

Textile mills throughout the South endured the Depression of the 1930s and the loss of workers to the war effort in World War II. And many, perhaps under new ownership, enjoyed the ups and survived the downs of succeeding decades of economic change.

Much of the information for this article was collected by the Remember Cliffside Website, a project of the Cliffside Historical Society. In Part 3: Textile mills seemed to be a permanent part of the Rutherford County economic landscape, but a big change was coming.