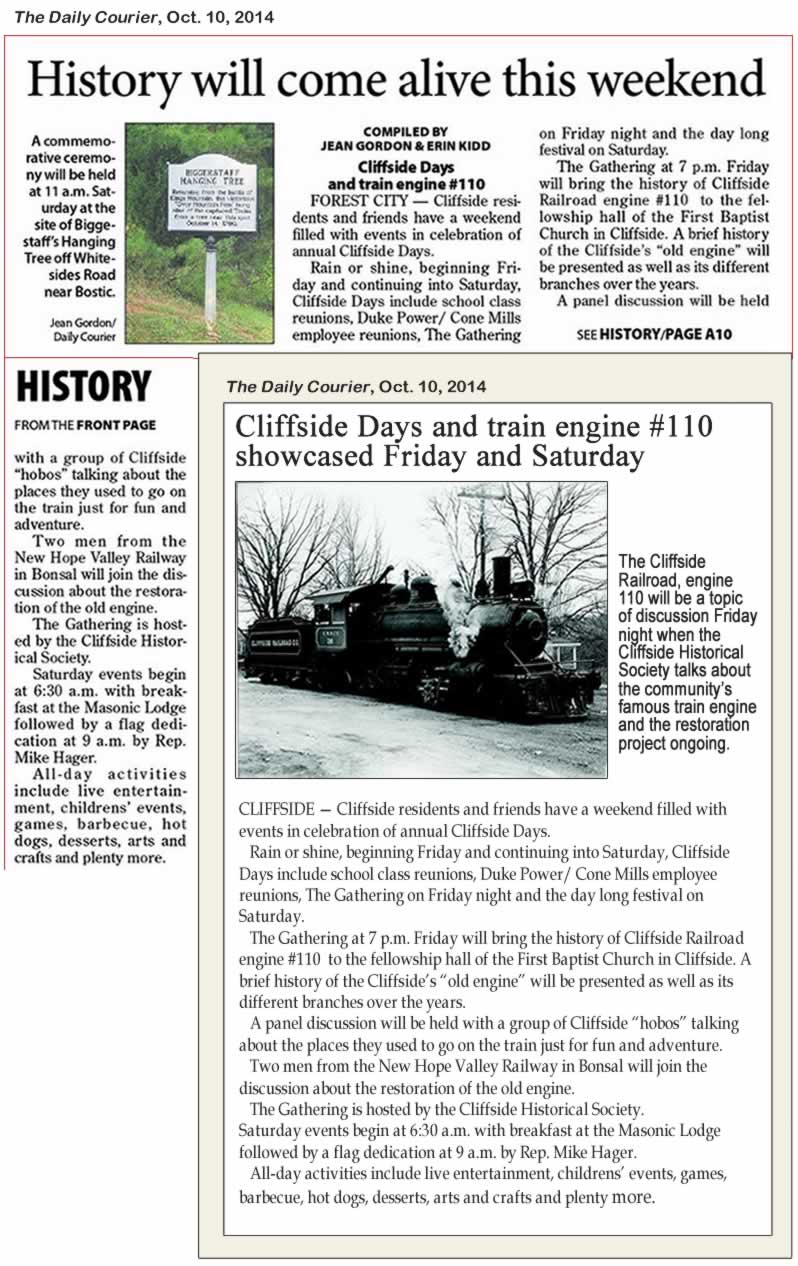 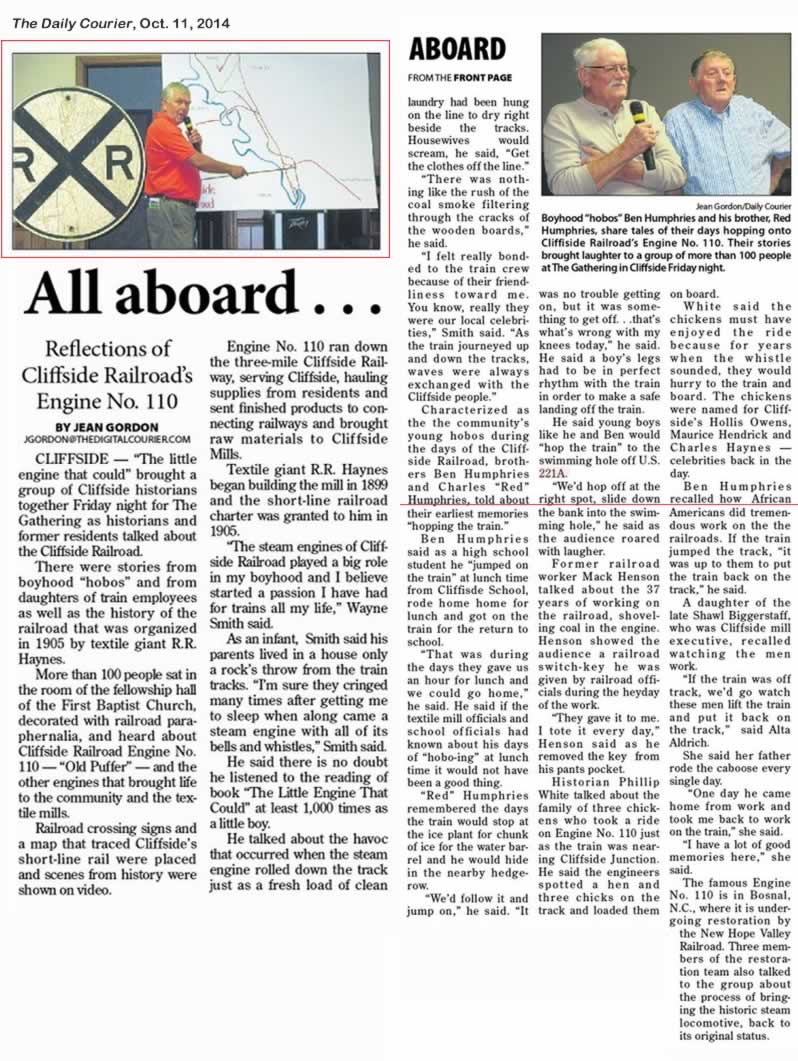 Each year the Gathering’s program is on a different aspect of life in Cliffside. This year Jim Ruppe, Wayne Smith and Phillip White researched and created a fine presentation on the Cliffside Railroad. Speakers included a trio of train history buffs from the NC Railroad Museum, home of our old engine #110, where it’s being restored to its former glory.
All who attended got a pamphlet on the CRR’s history and this replica of a 1910 ticket to ride on the Cliffside.

I have enjoyed the last few weeks preparing for tonight. I did what most of you do from time to time, relived in my mind my days in Cliffside. Sadly, many of the people who lived those days with me are no longer here. That is why it is so important that we keep the oral history of Cliffside going, by telling our stories to our children and grandchildren (or anyone else that will listen to us).That is why it is also important that we continue to support the Historical Society by renewing our memberships and endorse and help endow any upcoming projects of the Society that will keep Cliffside alive for years to come. The steam engines of Cliffside Rail Road played a big role in my boyhood and I believe started a passion I have had for trains all my adult life. Most anything train related still draws my attention.

Maybe it all began when I was an infant. Soon after I was born, Mama and Daddy moved into what we all know as the “Band-stand House” which was only a rock’s throw from the train tracks. I’ m sure they cringed many times after just getting me to sleep when along came a steam engine with all of its bells and whistles. Maybe I was having sweeter dreams than they imagined.

Maybe the trains of Cliffside led either my Mother or Aunt Lillian to buy me that Little Golden Book, ìThe Little Engine That Could.î I was told later that be- tween my Mother, Aunt Lillian, and Aunt Perrie Dene that it was read to me at least a thousand times! I guess that was also my first motivational book-I think I can, I think I can.

I know Santa Claus knew I would enjoy that first Lionel train that was spread out under the tree that Christmas morning. It sure looked like old #40. Of all people who would keep me aware of steam engines running up and down the tracks of Cliffside it was my Grandmother Davis. From the time I was a toddler crawling around under her feet on a linoleum rug until I became old enough to help with the chore, two or three times a week she would make that profound statement that never changed: Lord I hear that old train a coming–run get the clothes off the clothesline!!

Smoke from a steam engine played havoc with Cliffside housewives and their freshly washed laundry.

Many hours of my boyhood were spent on or around that infamous foot bridge at the end of 4th Avenue West. This of course was the pedestrian bridge that crossed the train tracks and connected to the park area toward Pine Street.

Whether I was standing or sitting atop a bicycle on the bridge, the thrill of an oncoming train never got old. Boys seemed to always get an extra toot of the whistle from whoever was the engineer at the time. There was nothing like the rush of the coal smoke filtering thru the cracks of the wooden boards.

And of course I, along with the rest of the boys of Cliffside, had to spit on top of the train as it passed. I guess that was the most vandalism I ever did as a youth in Cliffside.

I had mentioned to the guys in Bonsal [who were restoring the engine] that when they started scraping the top of our #110, there they would find the DNA of most of the males from Cliffside.

I felt really bonded to the train crew because of their friendliness toward me. You know really they were our local celebrities. As the train journeyed up and down the tracks, waves were always exchanged with the Cliffside people.

Looking back, maybe the reason the crew was so friendly to the boys of the day was they were actually checking us out to see what mischievousness we might have up our sleeves. The biggest influence by far that developed my love affair with trains was a man who lived across from my Grandmother Davis. Do you remember Jay Lewis Kanipe? Jay courted my Aunt Lillian from World War II days until his death in the late 1980s. Although they never married, he earned the rank of Uncle to me and truthfully was like a second Daddy to me and several of my relatives.

Jay knew more about trains than anyone I knew at the time. Although he was working in the mill when the train was making its normal runs, he seemed to know anything unusual about our trains. If a Union Pacific or Santa Fe boxcar found its way into Cliffside, Jay knew it, and he would tell me stories of its origin.

Many times Jay would take me out Hwy 120, thru Six Points and cross the county line, parking at P.R. Prices store. Within a few minutes an approaching Seaboard would appear. “Well, they are heading to Hamlet.” How did he know that?

Other journeys he would take me out Hicks Grove Road and park on the other side of the wooden bridge and we would walk on the bridge and await an oncoming empty CC&O coal train heading north. “Well, they are heading back to Erwin, Tennessee for more coal.” How did he know that?

Wasn’t life so much simpler back then?

This is Jay Lewis Kanipe’s railroad watch. He carried it with him many days. I can see him now comparing the time with the striking of the town clock or the NBC chimes at the top of the hour. It is a Hamilton model 992 and, according to eBay, is bringing upwards of $500.00.

It is for sale tonight.

I am asking one million dollars.

That is what my love of Cliffside past, family and community, and the memories of two old steam engines are worth to me. 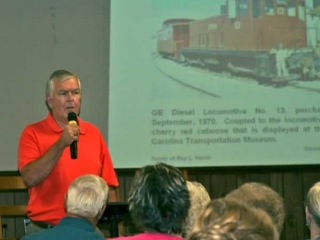 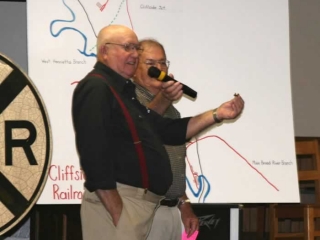 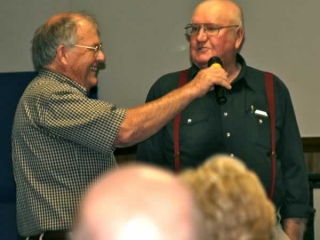 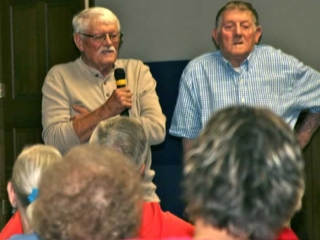 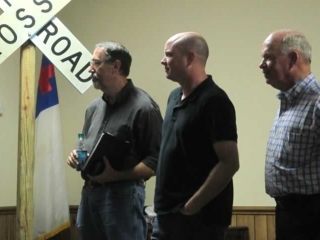 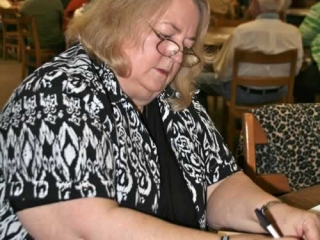