Ann: Mom and Dad for several years decided of course not to have children. It was during the depression, obviously. But then they began to start trying for children, and it turned out to be eleven years before they actually had me. So in 1944 I came along and they were proud parents, so we have pictures all over the place. Brenda complains there are more pictures of me and not too many of her.

We want to talk a little bit of some of the things that Dad and Mom especially wanted to make sure we did, and do it right as we went along. When we were in grade school, I remember the first year. We’d walk up the school steps in the morning, Dad and I. There would be lots of people sitting on the steps waiting for him to open the doors to open, and go in. I would walk by very timid, not say anything, following him up the steps. Finally after about the third day, Dad said, “Now, you speak to those people, they will think you are stuck up if you don’t.” So I did. I began to do that. And feel a little more confident.

This got me in trouble with my husband, some years later, because we were walking down the street in Durham one night going to a movie. So I spoke to some people and he said, “What you are doing talking to them…” So I kinda got in a habit speaking to people I went by, so I got into trouble. But anyway, we would try to do that, so we would not act like we were stuck up.

Another topic we’ve got is discipline, we will talk about that. Let me read an excerpt that, of course, I do not remember, but my mom wrote about her and Dad in the early years.

We were on the way to visit Dad’s brother Torrence. [And talk about confusing: My mother’s maiden name was Torrence. My dad had a brother named Torrence. We never could figure that out until we were ten or twelve, it took forever. But on the way Brenda and I got into a big fuss in the back.] Harley pulled over beside the road, got out of the car. [Reminds me of the strap, you just wait.] He went over to a little tree beside the road, broke off a small limb. He got back in the car and laid the switch between him and me. He did not say a word. Neither did we hear a word out of the two of you. It was funny to me because we did not have to tell you to stop fussing. 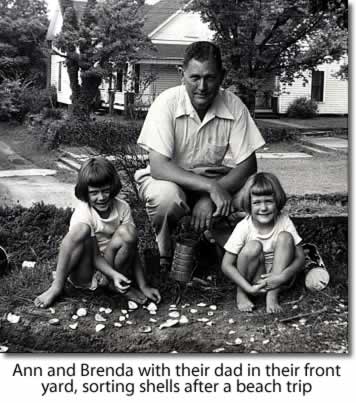 So, see, he always had that psychology he was using on us all the time. We had a friend that use to say, I totally agree, he said I fought with my dad; I just fought for years with him to decide who was in charge. But by the time I was four I knew he had won. So that is about right. By the time we were four we knew Dad had won.

In fact, talking about switches, one of things that use to kill us was, when we were into some kind of mischief, he would send us out, or Mom would send us out to the back where there were switches and rose bushes and things, and we could not decide if we should get the big fat ones to make them feel guilty, or get a little skinny ones that stung like the dickens. We had to get our own switches; that weren’t good at all.

Another discipline thing that I always thought was unfair, but now looking back I feel it was fair. Brenda and I had what are called Toni dolls. I probably was six and Brenda was four or somewhere along there. And after a year or so, I decided that our Toni dolls needed a haircut. So I was better with the scissors than Brenda, but she got her scissors out and was whacking away, and sure enough we gave them a haircut. Mine was fairly even all the way around, but Brenda had whacked the heck out of hers. And so it was just a mess. Boy, when Dad saw that, we both got a spanking. I said you shouldn’t do this and he said “you gave her the idea.”