Ann: One of the things our father really liked to do was to travel. They didn’t have a lot of money, as you know, being a principal and all that, but he was pretty frugal about saving the duplicating fluid. He was pretty frugal about everything but, buddy, he loved to get in the car and go someplace. In 1933 Dad and Mom and probably his sister and some other friends went to the World’s Fair in Chicago. And he talked about Sally Rand, the fan dancer. He thought that was a big deal, buddy. He got to see Sally Rand at the World’s Fair in 1933!

I’ve got two excerpts I want to read to you of a 1937 trip that he and Mom and his sister Lorene and their friend Flo Ferris made to Canada and to Niagara Falls. But there are couple of descriptions one along the Shenandoah Valley and the other Gettysburg, I want to read to you. I want to tell you my dad went to the school of writing that all doctors go to, and so I think I have got it all deciphered, or I may have stumbled a bit or two.

The Shenandoah trail is a most interesting trip, one winds around through the small mountains from Winston to Roanoke. The highway engineers are to be congratulated. I have never traveled a more delightful road. You can make better time really than on the other road. [You probably couldn’t make more than 35 miles an hour no matter where you were going in 1937.] From Roanoke to Winchester the roads are good, the land rolling, and the grass grows similar to that in Kentucky. Many really beautiful Colonial homes are seen on the sun-kissed hills. It makes one’s imagination run back to the times of the Washington’s, the Lees, the Byrd’s, and others who are American greats. The small towns with their narrow streets and antique houses give a feeling that the small town people have too great a knowledge of history and not enough aggressiveness.

When he was describing Gettysburg, he talked about it being

…a town of more than 3000 people just reeking with history. The battle field and the cemetery are very close. Saw where Lincoln made his immortal address, headquarters for Meade and Lee. Some two thousand acres were well kept, covered with monuments, cannons and markers. It is indeed an interesting place, and one is unable to go away without having been awestruck with the memories of the field, and remember the greater reverence for our forefathers who have gone there before. 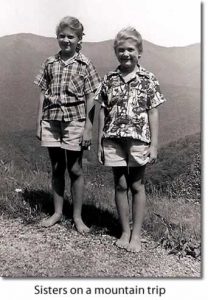 So he was always looking at the historical perspective for where he was going, and he really wrote pretty well. But he always did journals wherever we went. Our biggest trip was in 1956. We called it our western trip. Dad was a delegate from North Carolina to the NEA convention, which was held in Portland, Oregon. So this was an opportunity to take a trip. We were gone about six weeks.

We went through the southern parts of the United States and came back through the northern part. Now his goal was to make sure he went through every capital of the state we went through. So we went to the capitol and the capital building in all those states we went through—Alabama, Louisiana, Texas. Brenda and I slept through Texas. It was really, really hot, so the best we could do was open the window and lie down. It was really a marvelous trip because it was historical and interesting. But we got to do some fun things too. On the way, one of the things Dad made sure we did was learn the presidents, so we had to practice the presidents in order. We learned the capitals of the states, of course, and things like that. We learned to read the maps. He would say, okay, here is the map, where are we going tomorrow? We did get to go to Disneyland and Carlsbad Caverns and really big places like that. And then we went to Juarez, Mexico, across from El Paso, where we were able to buy some really neat little purses. Brenda and I thought they were just great, neatly tooled and well done. And we got to see a bull fight.

Brenda has a little excerpt she wants to read that has to do with those purses at a later point.

Brenda: It’s only just a sentence in a page in his journal. It was really traumatic for me and I thought this was just the worst thing that ever happened on this trip. And that was, we had these little purses, as she said. They had these leather straps. This was in Minneapolis, and, as he said, we stopped at a dairy bar to have a drink. [This is what he wrote:]

Brenda discovered thirteen miles later that she had left her purse. We lost 26 miles returning for that.

Ann: Well, he was not going to put it in writing anyway. He didn’t say a lot. He just turned the car around and went back. We thought one of the most decadent things that we did, we got to go to a movie on Sunday. We were in California so, of course, we didn’t do that here. Dad was kinda amazed that people worked on Sunday, and mowed their grass out there, too. It was educational for all of us.

Let me mention a couple of pictures I’ve got here. We went through Dallas and the Cotton Bowl, and I think this is the Petrified Forest, glamour girls there, Yosemite. We were really amazed at all the redwoods. Dad’s journal talks about watching all that. Mt. Rainier on July 4, snow everywhere. 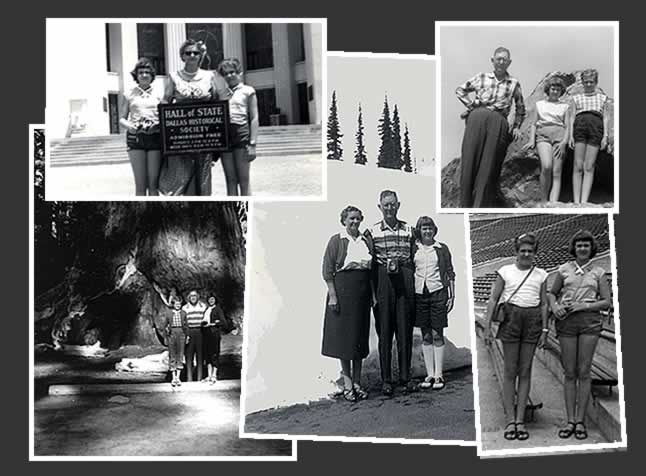