Ann Culbreth: It’s an honor for us to be here tonight and delighted to see such a big crowd. And I know that there are many of you who will have stories that I don’t know anything about. So after we get our little presentation think it would be kinda neat for those of you who would like to come up and tell that story about my dad. That would be great, or Mom even, for that matter. That would be fine. We would not be familiar, you know, with the things that happened at school with you guys. But just with us, so what we have decided to do tonight is to do a remembrance of the Cliffside and some pictures that we had and tell you a little bit about Dad and Mom as they were persons and parents to us. Then after that, we will give you an opportunity to come up and tell a story, I know Helen Miller said she had some she wanted to tell. We will let you come up and give you an opportunity to talk.

These first pictures that we pulled from a drawer, we had them piled up and not knowing what to do with them for awhile. So Brenda and I spent some time sorting through and decided the first few would be having to do with Cliffside School and the way you would remember Dad. Obviously, these are some of his pictures as principal in the early days, in 1941, although he had been there for some time by then, and a little later, and then when he retired. Then we thought you would like to see some of the faculty, and I believe that picture is in Reno’s book, and then I have another one here that I was able to find that had the names. So I thought you might be interested to see if you could recognize any of these people. 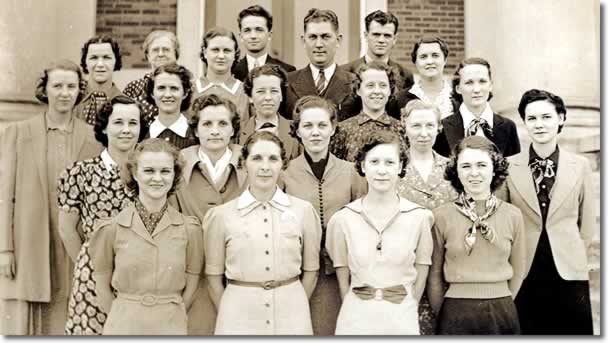 On the first row are Annie Ruth Cope, Juanita Whisnant, Gladys Tinkler and Frances Todd. Three of those on that row didn’t stay here very long, but some of you might remember them. On the second row: Ruth Robertson, Virginia Davidson, Virginia Christy, Letha Bame, and Mary Elizabeth Ratchford. I know Mom and Dad talked a lot about Letha Bame, but I didn’t know her. In the third row, Eugenia Randolph; Daisy Bolin, who became my aunt, she married Dad’s younger brother, Griffin, at a later point; Emily Hilliard; Macy Ezell; and Sue Whitesides. On the last row, Mrs. Hames, Alice David Hames; Anna Belle Logan; Mother, of course, Margaret Beatty; Gerard Davidson; Dad; and Jonas Waters; and then Sarah Tinkler.