I am not sure how I got conned into this but I think Brenda and Anne inherited traits from their father, because they said “you are going to be speaking tonight, you are going to say a few words and you will have a good time.” So, all of those things have happened.

I was late [on our first date] because the girl I use to date before I dated Anne was about five minutes away and I lived in what I like to call Frog Level. Most of you have heard of Frog Level. And I wasn’t even sure how to get to Cliffside the first time I went to see her. As soon as I heard what he said, I was never late again.

I want to say just a couple things, just a couple stories about Mr. Beatty. I think he forgave me when he found out I was a history major and I was going to graduate school at UNC at Chapel Hill and loved Carolina basketball. So we had a lot in common, we talked history and basketball. We watched basketball together.

He loved maps as Brenda and Anne have already said. We would often look at maps and an Atlas. He was very interested in what I did in Vietnam. I spent a year in Vietnam and we talked about it a lot and discussed it in great length and he was always knowledgeable about everything. 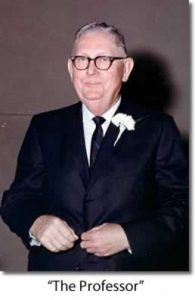 He told me one interesting story you might not know about. Occasionally apparently several people, several men would get together at the Memorial building to play checkers, maybe cards too. Sometimes something historical would come up and they would not know the answer, so they would call Mr. Beatty. The called him the Professor, and they would say, “Professor, we have a question for you, can you help us out here?” And Mr. Beatty kept a World Almanac right beside his chair in the den. I guess you’ve seen those World Almanacs, they come out every year, they’re about that thick. But he would be talking on the phone and flipping through the Almanac to look up the answer, and he always got it right, you know. He told me that secret and said don’t tell anybody, and I said okay I won’t. And ever since then, every year I’ve always bought a World Almanac.

The only time I have ever seen him embarrassed was once I had a flat tire at his house, and we went out to change the tire together. We did the “Lefty Loosey and Righty Tighty.” This car went the opposite way. It was a ‘63 Buick, I think. We tore the lugs off. He was so embarrassed about doing that. I will never forget that. I have forgotten how we got this fixed. But it was kind of a humorous incident.

I was going to close by saying that I thought that Mr. and Mrs. Beatty were both model parents. But I think I’d better change that word “model.”

Not too long ago we had some friends visit us, Ann and I, that we had not seen in years. One was a lawyer and the other a professor at the University of Florida. Well educated and had really good vocabularies, really smart people. And we hadn’t seen them for years and we were sitting in the den talking. One looked at Anne and asked what kind of husband has Spencer been through the years. And Anne looked at him and said, “Well, he has been a model husband.” And they both laughed.

And I thought, maybe I don’t know what the word model means. So a little later when they were in the kitchen, I sneaked into the little library and pulled out the dictionary and looked up “model.” The definition said, “model: a small imitation of the real thing.”

So I won’t say Mr. and Mrs. Beatty were model parents, but they certainly were great ones—and they raised two great kids, didn’t they?