I use to call it, when we had Thanksgiving senior citizens’ meals up at the school, “The gathering of the lost tribe of Cliffside”. So I can use that phrase here, I guess now, for you folks who love Cliffside, grew up here, lived here, or just have read about it on the Web site, and thought you would come see what was going on, what’s all this Cliffside stuff. But we are fortunate to have Anne and Brenda Beatty here tonight to talk about their dad. And I thought about this too: we advertised Mr. Beatty but you can’t say Mr. Beatty without Mrs. Beatty. They were a team, and just the type couple that you think of both of them when you think of one. They taught together, he was a principal and she was a teacher. They were very successful in what they did.

When I graduated from college in 1966, Mr. Beatty hired me to teach seventh grade in Cliffside School. And my brother-in-law Ben Humphries is back here somewhere. And, Ben, I mentioned you, and he said, “Sign this contract right now. How did you know Ben?” But Ben is a history person and Mr. Beatty was a history person, and they hit it off. If you liked history, he was someone you had to talk to and spend a lot of time doing it.

Anyway, I taught seventh and eighth grade. Then I had a sabbatical year, got my Masters Degree and was fortunate enough that when Mr. Beatty retired in 1969, I was named principal of Cliffside School. But while I was a teacher at Cliffside, we had ten teachers. And had a big building. You know that’s a big building up there. We had ten teachers, so you know we had a lot of vacant room. We had one room that was just the mimeograph room, the duplicator, the purple monster. And that purple monster had fluid that you put in. It was in a gallon metal can. These young ladies over here can probably tell you Mr. Beatty did not want you to waste anything. So he kept that duplicating fluid locked up. And I was just a young whipper snapper and didn’t have any more sense. Now Katherine Smart, his next door neighbor, she would put me up to it and I didn’t think anything about it. “We are out of duplicating fluid, go down to Mr. Beatty and get us a gallon”. So I would prance right down to the office and ask him for duplicating fluid. The first time, he looked at me a little funny and thought “What is this young guy doing?” But he got the fluid anyway. About four gallons later, a few days later, I found out that they had been afraid to go in and ask him. Mrs. Smart was his next door neighbor. She’d take him cakes and stuff. So they had put me up to doing things like that, Mrs. Smart and Mrs. Tinkler, Mrs. Green, different ones.

I was also the only male there and, you know, teachers take breaks, go to the rest room and whatever, and I would slip by the office and look in there and see if Mr. Beatty in there, was seated in the office, mid morning. “How are you doing today?” and, as you well know, he was a great Tar Heel fan, a graduate of the University of North Carolina. And I loved Tar Heel basketball team. And we would talk about the tar heels. I would just go in the office and he said, “Come on in and let’s talk.”

At that time we would have district teachers meetings and unlike today we didn’t have teacher work days until the beginning and end of school, three days before, and two days at the end. But we would have a day off to go to the district teachers meeting; it may be in Gastonia, or Hickory or somewhere. But I’d ride with Mr. and Mrs. Beatty, and usually Mrs. Tinkler, and go to these meeting. I can remember that in 1966, the World Series, Baltimore Orioles. And, his name just left me, he was 19 years old. We were listening on the radio coming back from that teachers meeting. And Mr. Beatty, on the final out—I was seated in front with him and the ladies were in the back seat—on that final out, Mr. Beatty just grabbed me by the leg, “19 years old!” He won about three games that series. 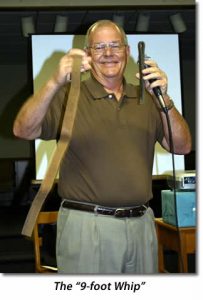 But, I say all that to say, he would come on like a bear to you but he was gentle and personable and very knowledgeable too. He had a different demeanor to the staff than he did to the students. Now I know all of you who were students have heard about, or seen, or experienced that face getting red, that smoke coming out of the ears and all that. My first year, on one of those visits to the office, we talked about student discipline. And these school teachers up here, and any others in the room, will tell right off, if you don’t have discipline in your room, you can’t teach, so the first thing to do, is to learn to control your class. So he told me, “I have the reputation of doing this and that, walking down the halls.” And he also said, “If you are going to paddle, take them outside, first of [the] school [year] and make it loud, so the ones back in the room can hear it. You don’t have to hurt the kid, but just hit them in way the paddle will pop. That will be good until the Christmas break.” He said, “Here is what I do,” and he got into his voice of reprimand [he would use] to a student right there in his office. He said, “If I have a student in here and they’re accused of doing something, but won’t admit it,” he’d just get in a loud voice, reach in that desk drawer, jerk that drawer open and grab that leather belt, throw it on the desk and stand up. You know, he was a tall guy. To the little kid in that seat, he’d say, “Alright, you got one more chance. Now, let’s be a man about this.” “Oh, yes, don’t paddle me, don’t paddle. I’ll tell you, I’ll tell you.” Then when they took care of things, he would laugh about it. Not while the student was in there. So if any of you experienced that, you know, when the kid got back to the room, he told the other students, “You don’t want to go down there, he drew the belt out, it was nine feel long. I thought it was a whip. I thought he was going to kill me.”

Well, along with taking over his office and his desk, when I assumed the principal-ship, I also got the leather strap. I never did use it. But I have it here. It’s like a lot of other things, with video cameras now, that home run ball you hit and you can talk about it, and it gets longer ever time you tell it. But video cameras, they don’t lie, and you say that to someone and they see the actual event videoed, they’ll say, “That wasn’t a hard-hit ball.” But our tales tend to grow over the years. Here is the leather strap. Have you seen it? It was nine feet long, wasn’t it?

That is enough, you did not come to hear me, but Anne Beatty Colbert and husband Spencer Colbert are here with us. They are from Cleveland, Tenn. They have been up there a number of years. Then we have Brenda Beatty Walters. Her husband Richard just had surgery and wanted to be here but he couldn’t travel tonight. So ladies, like you tell your students, speak right into the mike, we are recording this and will put it on the Web site.