Brenda: In 1930 Mother came to Cliffside. She finished Asheville Normal School and had a four year degree. She had stayed one more summer to work at the school until she could find a job. And Mr. Caldwell was up at the school recruiting and that is how she was hired to come to Cliffside, in 1930. She was real happy about that and happy to have a job too, they were hard to find at that time. When Mom came she lived in a teacherage, which most of you have heard about or are familiar with, that they had at that time. 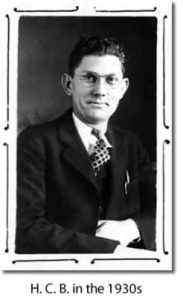 Of course, teachers could not be married. Women teachers, you know, you had to be single to teach. That was a rule developed by, according to some records that we found (that Mother wrote), Mr. Caldwell. And so they, Mother and Dad, dated some, on and off for a few years, and then decided to get married, and they were married in 1933.

She expected to have to quit her job and Charlie Haynes came to Dad and said, “Is there any reason why your wife can’t teach?” And he said, “No” and Mr. Haynes said, “Well, she has a job.” So that kinda threw that rule out the window, and so they both were able to teach, which was great because she was worried about not having enough money to live. So, I think that was kinda neat.

I did want to read something to you that Mother wrote when they got married and got back from their honeymoon. Anne asked Mother, sometimes in the ’90s, if she would sit down and write some of her memories so we wouldn’t forget about her life in the early years in Cliffside. I just want to read one thing that I thought was really neat from her little writings that she did.

When we got back from our honeymoon we decided to spend the night in Cliffside before going on to Gastonia and Lucia, to our parent’s home. When we turned out the lights to go to bed we heard an awful racket outside and a knock on the door. When Harley opened the door, there was a great crowd on the porch and in the street. One said they would give us some time to get dressed, but we had to come out to the street. And we did, and they told us to go ahead of the crowd. Mr. Charlie Haynes and others led the crowd. They had all kinds of pots and pans and other things to beat on to make a lot of noise. We paraded all up and down the street as far as the school building, where we turned around and paraded all the way back to the house, they making as much noise as possible. That was something to stay with me all these years. Can you imagine the president of the Haynes Mills leading the group of all those people, for so much fun for all of them. It was fun for us too, and I know it was just because they loved us. 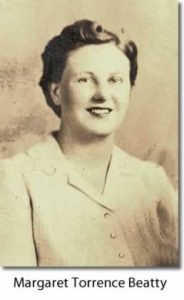 After they were married, the house they lived in was where the post office is now. Dad and Mom taught together there in Cliffside for awhile, I think about the first year they were married, and then there was an opportunity for Dad to be principal at Avondale. So they moved to Avondale. She was able to get a job there too along with him as principal. They did that for one year. And in the meantime, right after that, Mr. Caldwell got a job somewhere else, went to Marion.

They [Cliffside] brought in R. L. Leary as principal. So he was principal the year that Mom and Dad were in Avondale. In the spring, as Mom wrote to remind us, Mr. Leary was on a trip with some students and there was a car accident and he was killed. I don’t think any students were, they were just injured. So at the end of the year, Dad came back to Cliffside, to be principal—and he stayed there until he retired.

He did go to graduate school at Chapel Hill. He did this in three summers, in 1938, ‘39 and ‘40. And that’s where he finished his Masters. And Mom said while she was there she took what they called then “commercial courses” so she could learn to type really well, so she could type his thesis. Which she said was very difficult, but she did it, and so we were proud of her for that, of course.