Our old engine 110 was taken from Cliffside about 60 years ago. It was sent to a foster home, the Stone Mountain Railroad, in Georgia, where it was a popular attraction for about a decade. It may have operated under its own steam for a time, but eventually the old puffer, no longer able to puff, was pushed around the track by a diesel engine disguised as a caboose. Then for three decades it just sat, out of the spotlight, drawing little attention, gathering rust and dust, and its paint fading and peeling away. An unloved orphan in shabby clothes.

Then its future brightened. This photo shows the old engine being moved for the first time in 31 years, on its last trip around the Stone Mountain track. Shortly after, old 110 and its tender would be loaded on special flatbed trucks (with tracks!) for a trip to its new home, a little closer to Cliffside, in Bonsal, North Carolina. Stone Mountain Park has given the engine to the New Hope Valley Railroad, home to the North Carolina Railway Museum. The museum houses a collection of antique train cars, artifacts and historic train memorabilia. They plan to restore “our” engine, which will take many years and about $600,000. Perhaps you’d like to help the restoration along with a contribution. Go to www.triangletrain.com and click the Donate link.

Here’s the engine arriving at the NHVR on Feb. 6, 2013. Another truck followed with the tender. In weeks to come, we’ll bring you more info and photos of the move and the museum’s restoration plans. 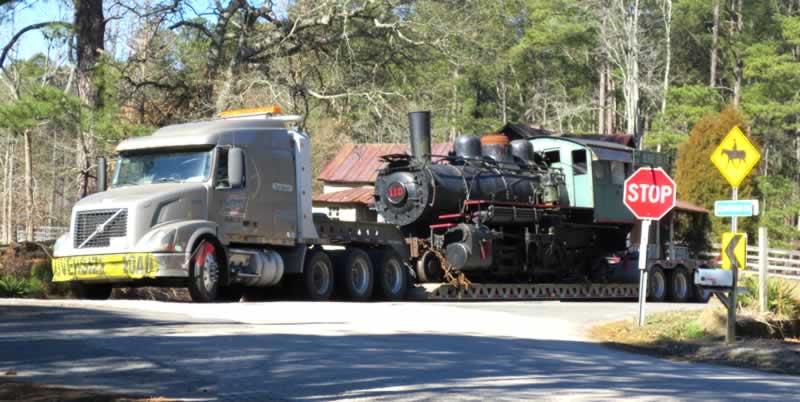