One Summer afternoon in the early 1970’s, some person of distinction—probably a politician—drove up to greet a gathering of mostly men. The appearance must have been publicized in advance; all these people wouldn’t ordinarily have been hanging around the square. We can’t see the object of their curiosity, he’s behind one of his greeters, but he was important enough to attract a reporter (lower left).

A few women are present, but not sufficiently interested to bring them close to the action. The man in the hat in front of the first car (in what appears to be a caravan), looks suspiciously like Charles “Red” Humphries, a Democratic activist in those days, who may have organized all the excitement. 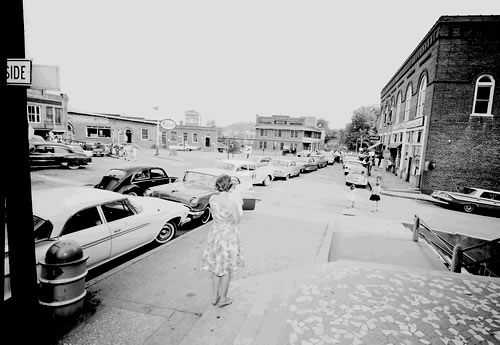 One woman, left, wonders what could be stirring up such a commotion.

Most of the downtown buildings remain intact, but, by this point in its decline, the traffic pattern had been changed by a median in mid curve, and sidewalk parking was now parallel—instead of angled as it had been for decades.

The year had to have preceded 1972, the year Esso became Exxon. At the garage Guy Hamrick was still pumping Esso, at about 36¢ a gallon.