On September 26 serious work began on the clock faces. Jim VanOrsdel, in charge of the clock’s restoration, Dean Bernanke and his crew from Albemarle Glass, and the Society’s own James Harris and Phillip White set to work. After removing the hour and minute hands, they proceeded to take out the glass panels and the iron framework that holds them in place. The thirty-three years since the tower was built had taken their toll on the metal, paint, glazing and caulking around these six-foot faces.

Janice and Marc Swing catered the affair under a tent provided by the McKinney-Landreth-Carroll Funeral Home.

At day’s end the components were carried away to AG’s headquarters in Albemarle, NC, where, in the next few weeks, the iron elements will be sand-blasted, primed and painted and new panels of milk glass will be cut to fit. Sometime in late October the components will be returned to Cliffside and reinstalled in the tower. 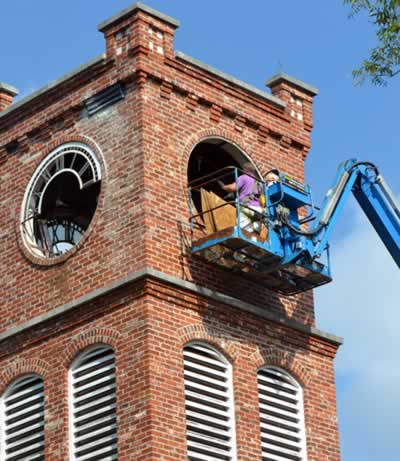 As the glass and iron framework were removed, the gaping holes were filled with plywood panels to keep out birds, insects and the weather. The panels will be replaced when the newly-refurbished faces are ready to be reinstalled. 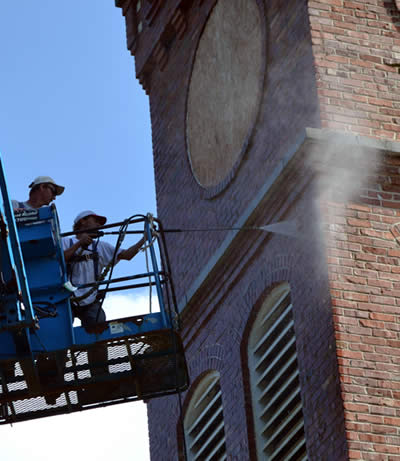 On the following day, David Bridges’ painting crew began its work by pressure washing the tower. After being allowed to dry overnight, the old brick received a coat of clear sealer for protection from the elements, and the louvers were repainted.