The components of the Cliffside Railroad were, in the 1950’s and ’60’s, the most photographed objects in town, mainly because it was one of the few working steam railroads still in existence and drew train buffs from far and wide. But rarely were photos taken inside the shed, where the engines were maintained. This is one of two we’ve run across.

The photographer, B. F. Roberts, Jr., of Spartanburg, S.C., wrote this on the back of the photo:

Locomotive #110 of Cliffside R R Co. undergoing repairs on Jan. 1, 1961 and being readied for I.C.C. inspection which was passed and the line is expected to be run by steam for some time to come.

“Some time to come” was soon to end for the CRR, for the very next year this engine, the last operating steam locomotive at Cliffside, was taken out of service and sold. The diesel age had at long last arrived. 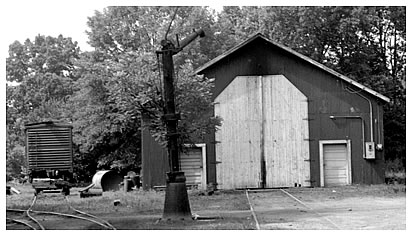 The shed (exterior at left) was located at the intersection of West 5th and Railroad Streets, behind and downhill from the Haynes home, where the Clock Tower now stands. In this view, the boxcar is sitting on rails that once extended across Main Street, past the cemetery and on into Cleveland County toward Mt. Pleasant.

At the left of the water pump, the tall black object, rails can be seen aiming off northward to Cliffside Junction, Henrietta and Avondale.