This is one of only a few photos we’ve found of the building of the tower in the summer of 1978. It’s especially pertinent now as we near the restoration stages of the clock.

Showing is the south side of the structure, and below is a similar view today. 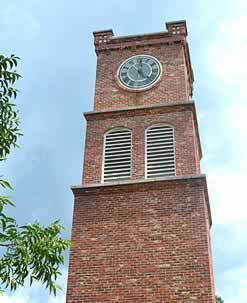 Toward the end of September (2011) we’ll remove the clockfaces to be refurbished. For two or three weeks the holes in the tower will be filled with circles of plywood.

Quarter-inch-thick milk glass, like that originally used in the clock in 1920, will replace the existing frosted glass, which has a thick coating of grime and soot from 33 years of exposure to smokestacks and the environment.