It was a simpler time back in the fifties. Cars were simpler. No computers, and many, many fewer parts. 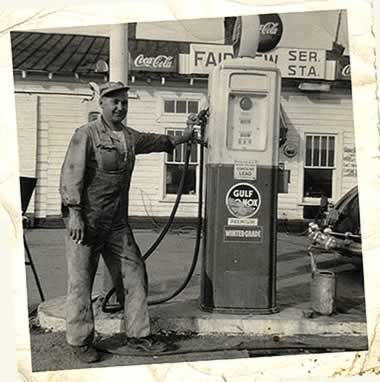 If one had “car trouble” (and didn’t repair it himself) Cliffside folks had a couple of options available. One was the Fairview Ser. Sta., as the Coca-Cola sign stated. Harry Hawkins and Guy Ramsey (above, left and right) were the proprietors. That’s also Harry having a cigarette at the pump.

A stop for gas might reveal a need for additional oil or other fluids, or a new fan belt. Parts wore out more quickly in those days. It was unusual for a car to last as long as 100,000 miles. If you had a serious problem, you might need to leave it a day or two, but get your own ride. A loaner? Forgetaboutit!