The eagle eye of James Harris has noted lately the propensity of this flock of turkey vultures to congregate on the various rungs of our water tower. Do they know something we don’t? Have they arrived to pick over the remains of Cliffside? Aren’t they about 30 years too late? 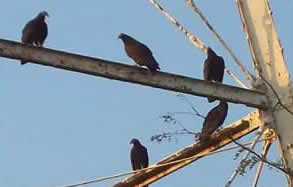 Or perhaps they are just migrating. The Western North Carolina Nature Center says: “Although permanent year-round residents in North Carolina, they are migratory. During the fall and winter months, turkey vultures from northern locations are often seen migrating through our area.”

Surprisingly, they are not raptors, like hawks and eagles, but are members of the stork family. Don’t harm them; it’s illegal to kill, injure or possess one of these birds.

Too bad they don’t feed on kudzu; we’d invite them to stay.

Update: No sooner had our new November material “hit the stands” than we got buzzard sightings from two sources. Ginny Ann Reid sent these photos and this account of her recent encounter with a bevy of buzzards over at her and husband Ashley’s estate on Candyshell Acres.

The Visitors were at our house for four days. I counted 70 on the dam near the porch at one time. I was afraid to go out of the house. We could hear them on the roof. Sounded like thirty men working up there. Ashley said they were coming for him.

And Sam Davis reports that

The birds have been around the Cliffside area for a while, before Mama died 10 years ago. I would see them over in [the Hines Road] area. I was told at the time the government stocked them in that area, not too sure about that story.