Always on the lookout for Cliffside memorabilia, we found this old photo on eBay. Actually it’s a postcard. On the back is stamped “Railroad Photographs, 47 Royal Street, Allston, Mass,” with this handwritten description: “Cliffside Railroad #110 Light Prairie, Cliffside to Avondale N.C. 3.7 miles.”

We asked the seller, MMG Photos, where they got the postcard. Their reply: “…from the Culver Pictures, Inc. archive. Culver was a NYC based photo distribution house that archived and distributed photos to various media outlets all over the world.”

Apparently the photo is from the mid to late 1930s. The engine was purchased by Cliffside Railroad in April 1933. In the photo its paint looks somewhat weathered, indicating a few years’ wear. The automobiles along the (unpaved) steet in the background are definitely from the pre-World War II era.

And now the questions. Where was the train the moment this was taken? At first glance, it’s obvious: The camera is positioned behind the old post office, looking down South Main Street. To the left are the tracks leading to the shipping department, and in the extreme foreground are the tracks that went behind the supply room out to the coal trestle. And above the tender, behind the big tree, we can see the filter plant. 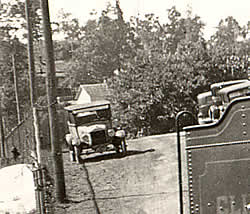 Or can we? And what is the long building on the other side of the train. It looks like an engine house, or “train shed,” as everyone called it. Was there ever such a structure at this precise location in Cliffside? On the 1942 map, the “old” shed is shown along Pine Street, southwest of the store building. The only other photographic evidence we have of the old shed was taken in 1940 in Jess Honeycutt’s yard on S. Main. 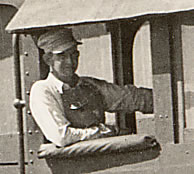 And looking further down “South Main” (right), the houses in the far distance appear to be on higher ground than those closer in. Does that agree with the actual terrain of that area, which generally slopes down to the river?

If not in Cliffside, then where was the photo taken? Wherever, we’re glad to have it in our collection.

Who can identify the engineer? Anyone?

The building behind the train is where the RR scale was located under a shed building. It had open sides and a big box holding the scale equipment. It was rarely used but I did see box cars there on occasion sitting on the tracks. My friend Larry Harris lived on the other side of the shed and you can barely see the top of his house in the picture. I spent many afternoons after school playing with Larry there.

And this from Ben Honeycutt:

I believe that the picture is exactly where you speculate. I recognize the huge sycamore tree that was just this side of the Filter Plant, also the tree just this side of it which was in our yard and the small hut (it may have been a small gatehouse, I’m not sure) to the left.

Anyway, the hut was near another gate across from the Filter Plant that went down in toward the end of the train tracks near the shipping platform. The curving tracks to the left of the train allowed the train to unload the cotton bales in the warehouses.

As for the houses in the background, I think that the relationship of the houses to the filter plant is a bit deceiving. As one went down the hill past the Filter Plant and approached the houses where the Monroes, the Comptons, etc. lived, there was a road that turned back to the right and circled the Filter Plant, coming back into S. Main between the Filter Plant and our house. The Herman Norville’s lived in a house on that street for several years. The two houses one can see in the picture may have been across the street from each other just as one made that right turn just past the reservoir of the Filter Plant.

Anyway the other end of the train shed seems to correspond to the picture you mention taken in my front yard. The cars one can see above the rear of the train seem to be in S. Main from the area of the sycamore tree and then toward the front of the Filter Plant. This is where Filter Plant employees and perhaps a few others parked in the early forties and later.  I have a bit of trouble with the house one can see just behind the engine, but it has to be beyond the train shed and below street level. The Jerome Harris house was there next to Loy Wortman’s and Horace White’s house was a bit further on but, as I recall, more at street level.