The location is obvious. It’s on the Cliffside-Boiling Springs road, four miles from Cliffside, two miles from Boiling Springs at the intersection of McKinney Road. One day, probably a Sunday, judging from the suits and hats, these two cars collided. The 1950 tag on the Olds convertible marks the time as late 1950 or early 1951. The men at right are Coran Padgett and his son Gene.

There has been a store at this location for decades, most often run by a Beason or Hamrick. The sign on the white building says “Crawford-Beason Groceries—Gas—Oil.” 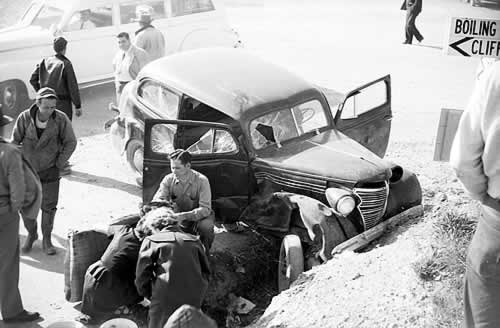 Bonus photo: Roy Lee Harris, then just out of high school, happened by (or was alerted) and made a series of photos. In the photo at left, two women are picking through the car’s contents. An ambulance appears to be leaving the scene. Remember when ambulances were painted white?

Several readers have identified the man behind the wrecked Chevrolet looking toward the camera as Robert “Tubby” Hawkins.