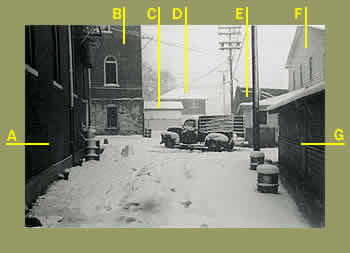 Locator:
A- Rear of Memorial Building.
B- North side of Store/Town Hall Building.
C- Appendage to Store Building.
D- Multi-purpose building: immunization site, polling place, etc.
E- Warehouses; for a time part was used as a feed store.
F- Taller section was a warehouse; once a skating rink on second floor. Lower section in front (just beyond the truck) was the washerette.
G- The cannery building.

The Jack Rabbit Co. stamped the photo “February 1958,” although Jim Ruppe could swear it was ’56 or ’57. He noted that the snowfall was 6 ½ inches. Jim calls the picture “Going Nowhere on a Street With No Name.”

I took this picture in the morning after the truck was left stranded from the snow that began the previous evening. Apparently the driver had tried to ascend the hill between Town Hall and the Memorial Building and after trying several times, he abandoned the vehicle for a cold and chilly walk in blustery conditions. (No matter where he tried, from the truck’s location he would eventually have to climb a hill to reach Main Street.)

“There was a unique appendage perpendicular to the Town Hall Building (C) which served as garages on the lower level and the upper section was a trash bin for the businesses located in the building. The bin was accessible from Miller Furniture Store’s loading platform. The building featured a corrugated roof and the bin was metal lined and slanted at an angle similar to the slope of the roof on the side shown here. The trash would be removed by positioning the ‘trash truck’ under the garage side shown in the photo, opening a top hinged door and allowing garbage to free fall into the truck’s bed.

There seems to be a lot of trash cans in this picture, but the ones in the front of the cannery (G) are filled with cement for the purpose of deterring parking, in this case to prevent blocking of the street. These parking impediments were the ‘kinder’ type, as others had bars positioned through the barrel and resembled WWII harbor mines, with detonator spikes protruding from their sides. They could open a car fender like a can opener!

The truck is probably a ’49-’54 model Chevrolet or GMC and was of the vintage when trucks were used as work vehicles. The high sideboards were used to contain the contents being carried in the bed. Many a full sized cow or a couple of young calves have found their way to and from the sale barn in the rear of such a truck. Lower sideboards were also seen, providing convenient spots for advertising.

Update from Phillip White: “The later versions of the parking barricades made of concrete and metal rebar were commonly referred to as ‘sputniks’ by some of the mill officials. I believe Mr. Bearden was in charge at the time. When he left one of the first things done was to remove all the sputkniks and bury them in a dump.”