A picture on the wall

In a 1969 feature story in the Courier on Broadus Roach, who was the director of Cliffside’s Memorial Building from 1922 to 1931, the writer describes the “main room” of Roach’s home on Big Island Road, near Shiloh, southeast of Forest City.

The room is of dark wood. About the mantel are old photographs of relatives. A big painting of Chimney Rock hangs on one wall. Opposite that is an old upright piano with several music books open on the stand. A bare lightbulb lighted the room.

As we read that, a bare lightbulb went off over our head. In the collection of Cliffside postcards from the 1920s, among those showing various areas of the Memorial Building, there is one of the “Secretary’s Room,” where Broadus Roach lived during at least some of those years. On the wall of the room hung a big painting of Chimney Rock. 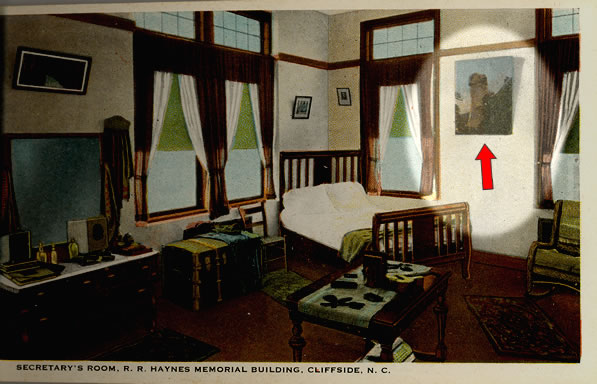 Broadus, who contributed much to Cliffside as organist at the Baptist church and leader of youth activities, left Cliffside in the mid ‘30s. Obviously, he took something with him: the Chimney Rock painting.

This story also appears in the Fall 2008 issue of The Cliffside Chimes, quarterly newsletter of the Cliffside Historical Society.