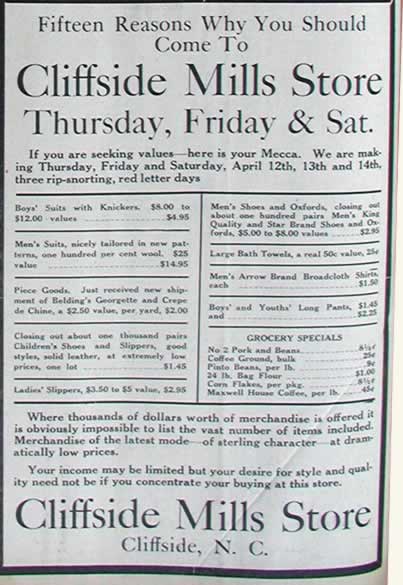 If there’s one thing Cliffside folks looked forward to, it was rip-snorting, red letter days. Look at those 1928 prices: men’s suits $14.95 and ladies’ slippers, $2.95. This must have been the Wal-Mart of its day.

Why did they price items at half cent amounts? (See pork and beans and cornflakes.) How would you pay it?

When the mill worker read “your income may be limited,” he or she probably muttered, “you got that right.”

The store was located in the space occupied in later years by Ballenger-Jackson Department Store and the grocery store on the corner of the building that, over the decades, had a succession of names, including “Dixie Home Store.”

R.G. Watkins remembers the entry to the “company” store was in front of the building where it was a “dry goods store,” which continued all the way to the rear of the building. Near the rear you could turn left, where it became a grocery store that ran all the way to the side entrance, where later the Miller Furniture store was housed. Between the furniture store location and the rear of the drug store there was an open space, which had a wide flight of stairs to the second floor where the Town Hall was located. The county used to send a nurse around every summer. She used that open space to give “free shots” to one and all.