Not long before the old mill shut down completely, while it was only being used for storage, we took this photo of the steam whistle. It was located on the roof, near the boiler room.

We know it was once used to wake up the village in the event of an emergency, such as a fire or flood, but it may also have been used to signal the end of shifts. Does anyone remember?

Just before major demolition of the 100-year-old mill began, someone saved the whistle from the scrap yard, and turned it over to the Society. For several years it lay in a corner of our office in an old cardboard box. We had no idea what to do with it, until… 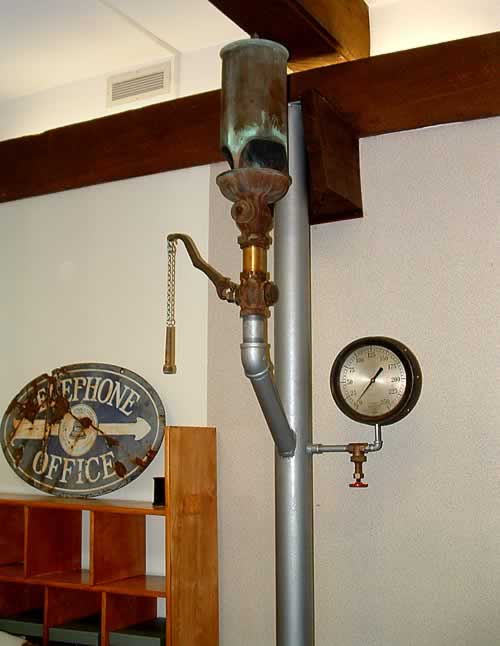 Phillip White and James Harris ganged up on the artifact one day and, using some old pipe and a pressure guage once in service at the Haynes Mill in Avondale, restored it to semi-working order (without steam). Don Wilson helped with the new brass fittings.

They installed it in our office in the Rock Building.

It doesn’t whistle, but it’s a good conversation piece, and what better way to display it? Preserve and protect, that’s our motto.

The blue sign at left used to hang on Reservoir Street in front of M.B. Callahan’s residence behind the Baptist Church, where he and his family ran the phone company.