Home » Memories » Projects & Memoirs » Where are they now? » Lalage Freeman

Lalage Grigg’s family moved to Cliffside from Illinois in 1927 when she was 13. Her father, Samuel, had died eight years earlier.

She lived on N. Main St. with her mother, Bessie Gold Grigg; her brother, Wendell; and sister, Hazel. 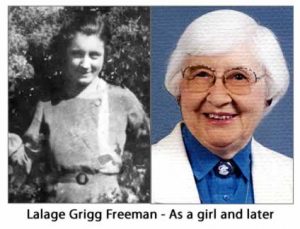 Lalage (pronounced LAHL’-age) graduated from Cliffside High in 1931, then attended Asheville Teachers college where she got a BS degree in 1936.

She worked in the finishing department in the mill in 1931-32.

On her life in Cliffside
"Quiet, peaceful, happy, poor by most standards, but we didn’t know it. Our favorite pastime was walking to the post office once or twice a day, not caring whether there was mail or not; just something to do with a friend."

A special memory
"I remember a road sign with a motto, adage, or whatever coming from Avondale entering Cliffside that said ‘One careless moment may mean a lifetime of regret.’ The sign was always interesting and amusing."

After college Lalage taught school in Lake Lure for five years, from 1936-1941.
She worked in the Navy Yard at Norfolk in the chemical laboratory from 1942 to 1945. She returned to teaching in 1954 in Marion, N.C. where she worked for the next 14 years. During this time she managed to earn a Masters Degree from Appalachian State in Boone.

In 1968 Lalage moved to Morganton and became a guidance counselor.

Her sister Hazel remained in Cliffside throughout her life. The widow of the late Claude McCurry, Hazel died at 97 on July 5, 2010 while in a nursing home in Bostic.

In the same month, on July 28, Lalage passed away at age 95 in Grace Hospital, Morganton.

She was an enthusiastic member of our Society.