Home » Memories » Projects & Memoirs » Where are they now? » James Price

James is the son of George Price, Jr., and Estelle Peeler Price, both deceased, and the brother of Bobby and Harold Dean. They lived at three different locations in Cliffside: 44 River Street, 53 River Street and 11 Pine Street.

George and Estelle came from farm families in Cleveland County. George, known as “June” (for Junior), worked at Cliffside Mill for 17 years, from age 16 until Estelle died (at age 42) just one month before James graduated from Chase High School in 1962. 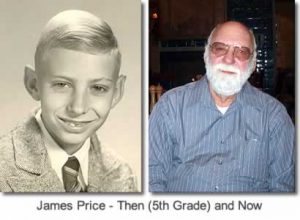 “I remember all my Cliffside teachers in grades one through eight (all female): Lovelace, Mabry, Cobb, Wells, Christy, Tinkler, Beatty and Green. My favorites were Mabry, Christy and Green

“As a teenager, I had two newspaper routes, the Charlotte Observer and the Spartanburg Herald.

“A list of things I consider unforgettable includes the annual Halloween party at the school, watching the Cliffside semi-pro baseball team and Little League teams play, and the Christmas parades. And I couldn’t leave out ‘drawing the pond.’

“The most unusual thing that ever happed to me in Cliffside: I was once questioned by Deputy Ben Humphries about the ‘Great Train Robbery.’ I had gone to Mills Drug Store to buy my weekly Sporting News. I lived at 11 Pine Street, directly behind the drug store, down below the railroad tracks. I had to go between the train cars to get to the drug store and back home. Some one had robbed the train, taking mail bags. Apparently, someone had seen me going between the train cars. It wasn’t more than an hour before Ben showed up at our house and questioned me. He was satisfied with my explanation.

“What made Cliffside special was the closeness of the people and their willingness to help each other, and the many life-long friends I made. It was truly a community and a great place to grow up.

“Cliffside was a picturesque town. It may have been small, but but it had everything we needed. The storekeepers were all very friendly and truly neighbors. I especially enjoyed the theatre and meeting my friends at the ‘Bowling Alley’ and later at the ‘Cafe’ to talk, listen to the juke box and eat chili or a cheeseburger (with mayo, chili and slaw). The food was great and even better when Sun Drop came along. Those were great years.

“After graduating from Chase in 1962, I joined the Air Force with Dean Dobbins. I was stationed in San Antonio, Texas, Greenville, Miss., Montgomery, Alabama, Weisbaden, Germany, Ankara, Turkey and Las Vegas, Nev.

“I have now practiced law for 30 years, working both for law firms and in my own employ. I have been self-employed for the past five years.

“I am a member of the California State Bar, the Riverside County Bar, and the American Board of Trial Advocates. I have specialized in personal injury and medical malpractice law. I am also admitted to the Federal Court’s Central District of CA. I have tried 85 jury trials and four bench trials. Four of my cases have been published in the CA case books. I serve on the panels of Riverside County and San Bernardino County panel of arbitrators. I also do private arbitrations and mediations.

“My wife Rose and I live in Moreno Valley, California. We celebrated our 20th wedding anniversary on Sept. 2, 2009. I have two step-children, Chris (36) and Lezette (25). Rose and I have one child, Raymond (19). Lezette graduated from the Art Institute, Las Vegas. Raymond is currently attending the Art Institute, San Diego. Lezette earned a B.S. degree in Graphic Design. Raymond will earn a degree in Graphic Design. Chris is a superintendent with a construction company. He and his wife, Amber, presented Rose and me with our first grand-children last year, twin boys.”