Harry, the son of Harry and Meredith Ingram, has a sister, Laverne Ingram Simpson, and a brother, Jim Ingram.

He lived on Academy and Church Streets in Cliffside from his birth in 1932 until he left for the service in 1950. He did not work while in Cliffside, at least not in an “official” full-time job. 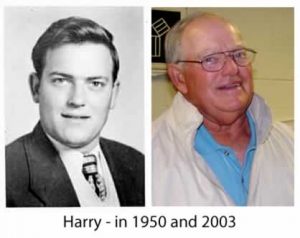 The teacher at Cliffside High who impressed him most was Dorus Huss, who was also the coach for most boy’s sports.

Harry was much involved in the school’s extra-curricular activities. He was in the band all four years, playing trumpet; was on the football and baseball squads, as well as the newspaper and annual staffs; and sang in the glee club.

His favorite special or funny incident was the time he “cut my cousin Billy’s hair with Mom’s scissors and used his haircut money to buy a cigarette roller and tobacco. Billy got a good whipping.”

His summers were special to Harry. He loved swimming and fishing in the creeks and rivers.

After graduation, Harry joined the Air Force. Upon discharge, he attended and graduated from Lenoir-Rhyne University, then went to Appalachian State for his MA.

He spent much of his working life with the North Carolina Division of Vocational Rehabilitation, working with people with disabilities.

He lives in Morganton, N.C. with his wife, the former Doris Whitener. They have a daughter, Kristin Elizabeth.