Home » Memories » Projects & Memoirs » Where are they now? » Frances Houser

Frances’ parents were George Fate and Elaine Byers McMurray. The family included Frances and her older brother Harold. Her parents and brother are all deceased. She was born in 1934. The McMurrays lived near the roller mill that year, then later in two different houses on Railroad Street and on South Main Street. 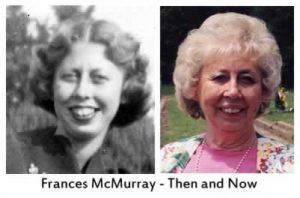 Funny incidents:
The most colorful characters in her family must have been her grandparents.

“When I was in the lower grammar grades, I got sick at school and was walking down Main Street toward home. A car pulled over and stopped. I don’t remember who the man driving the car was but Mr. Rob Sparks was with him. He asked me if I wanted a ride downtown. I let them know right off, “No.” At the time Mr. Sparks usually cut my bangs. The next time Mama took me to get my bangs cut, Mr. Sparks told her she didn’t have to worry about me getting in the car with a stranger, that I didn’t get in the car with anyone. Mama had taught me well.”

Special things about her life in Cliffside:
“The fact that I knew everyone and they knew me, close walking distance to town and everything. The fact that I could just walk across town to Grandma’s which I did 3 or 4 times a day.”

What she misses:
“The closeness of the people. All the many advantages that we had growing up there; knowing everybody.”

Frances, whose husband Buddy Ray Houser also worked at PPG, from 1962 until his death in 1990, lives in Lattimore, N.C.