Home » Memories » Projects & Memoirs » Where are they now? » Edward Hamrick

He’s the son of Robert Z. and Margaret Scruggs Hamrick. His first home was on Reservoir Street; later his family moved to 66 North Main, on the hill across from Dr. Radford’s office. He has a sister Jane. His brother Ken is deceased. 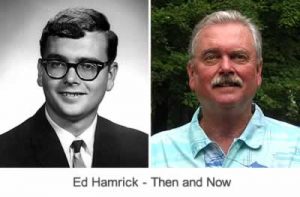 Born in 1947, Ed graduated from Chase High, class of 1965. He attended UNC-Chapel Hill and got a BS in Business Administration in 1969.

He went to work for Burlington Industries as a planner, first at Raeford, N.C., then at Clarksville, Va. In 1973, Ed, determined to find a town with a name hard to pronounce, settled on Chocowinity, N.C. to work for National Spinning Co. He has held many different jobs there, mainly in production planning, customer service and most recently as Director of Marketing. He plans to retire at the end of this year.

His Family
Ed’s wife Dianne is a cost accountant for a local construction company. His son William Chad is in the US Army. He’s now stationed in Colorado Springs, but has served in Iraq and Afghan. Chad and his wife have two sons. Ed’s daughter Tonnya works in a cardiac care lab in the New Hanover Regional Medical Center in Wilmington. She and her husband have two daughters.

Life in Cliffside
The teachers Ed remembers best are Mrs. Hames, Mrs. Wells, Mrs. Padgett, Miss Christy, Mrs. Beatty and, in PE & sports, Mr. Toney. His friends were Steve Condrey, Melvin McCurry, Max Moser, Danny Hawkins and Jerry Bailey, who was Ed’s best friend in later years (“He and I got into the most trouble.”)

A memorable event: “My uncle Clayton Scruggs and wife Tiny had a cabin on Lake Lure. They had a 10-foot-high boat house with a picnic table on top. Aunt Tiny liked to keep your tea glass full. One Sunday she tried to re-fill my cousin Don Bailey’s glass one more time. Don took his glass and ran off the top into the lake.

The things most special about Cliffside: Saturdays, the movie, shooting marbles before school started, Sundays at the Baptist church, climbing chinaberry trees at grandma’s, the Cliffside café, Ruppe’s grocery store and summer nights on the front porch.

What Ed misses most about his hometown: The closeness of all who lived there, and the comfort of those safe and happy times.

Ed Hamrick With Friends in the 1963 Royal Ambassadors