Home » Memories » Projects & Memoirs » Where are they now? » Dan Wortman

Danny graduated from Cliffside High in 1951, then attended Wake Forest University where he graduated in 1955. 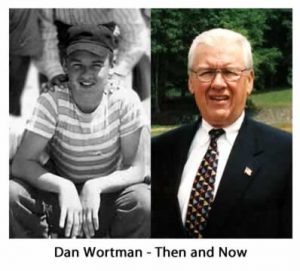 During his school years, as most kids did, he worked during summers: in the cannery; in the painting crew (painting company houses); and in the mill (weaving, inspection, bleachery).

His old friends are too numerous to mention (“That was the Cliffside way.”)

Life in Cliffside: “A great place to grow up, uncomplicated, problems were few, relationships pleasant. Work was hard, money was short but life was good.”

In the late 1950’s, he served four years as an officer in the U.S. Navy. His primary station was at Barbers Point Naval Air Station, on Oahu, Hawaii, He was discharged with the rank of lieutenant.

From 1959 to 1963, Dan was Executive Director of the Rutherford County Economic Development Commission.

In 1963 he moved to Gerber Baby Foods, Asheville, NC, serving as personnel director until 1970.

His career from 1970 to 1998 was with Bernhardt Furniture Co. in Lenoir, NC., until his retirement as Vice-President of Human Resources.

Martha died in 1989. Dan continues to live in Lenoir. He has four grandsons and one grand-daughter.