By Reno Bailey and JoAnn Huskey

When it came to pranks and practical jokes our town had its share. Some became legend, like the girls hiding in the graveyard at night and making ghostly noises to scare passersby. Here are a couple of Cliffside high jinks, the details of which may or may not have been embellished over time.

In Byron Bailey’s front yard at 59 N. Main Street there was an old, stunted, rotted-out tree, just at the edge of the sidewalk. Over the years, it had been so badly pruned and underfed it was an eyesore. Of course, no tree in Cliffside, including this one, could be cut down without the Company’s permission. In fact, if a tree required removal, the outside crew would do it.

Now, Byron was a staunch Democrat. His good friend, Dan Scruggs, was an equally fervent Republican. One election season, Dan asked Byron’s permission to put one of his GOP candidate’s campaign signs on that tree in Byron’s yard. He must have been shocked when Byron agreed.

“You swear you won’t take the sign down?” Dan asked again.

“I swear. And it hurts me that you would even think I’d lie to you,” Byron said, laying it on thick.

So the next morning Dan tacked the sign on the tree, hopeful that it would boost his candidate’s vote count. That afternoon, on his way in to work, Byron happened to see Roy Hamrick, the outside boss.

“Say, Roy, that tree I’ve been telling you about—it’s really looking bad. You might want to take a look at it. It might fall on some school kids.”

The next day a crew arrived and cut down the tree and hauled it—with the campaign sign still attached—away to the landfill. Byron had kept his promise.

No doubt, in the days to come, Dan pulled a fast one that paid Byron back in full. Such was the nature of friendships in Cliffside.

From the Fall 2010 issue of The Cliffside Chimes

The Fight
By JoAnn

Fred Ruppe had grown up at the bottom of South Main Street in Cliffside, and so had Gordon Thomas. They had been friends then, and had remained so over the years. When Fred and George worked at Fibre Industries, Gordon, Gordon’s wife Betty and their son Michael also worked there. Since Gordon was driving his car to take his family to their jobs anyway, he agreed to allow Fred and another friend, George Scruggs, to ride with them, rather than having to drive themselves. Their paying Gordon a few dollars at the end of each work-week worked out well, and saved them all money.

One weekend after Gordon let Fred out at home and drove away, Fred realized that he had forgotten to give Gordon the money he was owed for Fred’s transportation that week. He called George to be sure, and George verified that Fred had not paid Gordon. When Fred called to reassure Gordon that he realized he had forgotten, and would pay him, the two of them hatched a plot to pull a prank on George.

On the way home after their next day at work, Fred announced to Gordon that he had thought about it, and distinctly remembered paying him the prior week, so didn’t owe him anything. Gordon retorted that he had certainly not been paid, and Fred owed him the money. 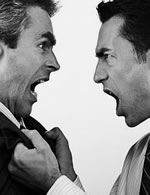 During the drive, they argued back and forth, each trying to get George to support their claim, and pretending to become more and more angry with each other. George, caught in the middle of their argument, kept trying to calm them both, telling them there was no sense in their getting so mad over a few dollars.

Then, by prearrangement between Fred and himself, Gordon jerked the car over to the side of the road and skidded to a stop, announcing that they would settle it once and for all. He threatened to beat the money out of Fred, and Fred responded that Gordon was the one who would get his tail beat. They jumped out of the car, yelling and scuffling with each other, pretending to fight.

George stood helplessly by, at a loss to know whether to try to separate them, or what he could do to break it up before either of them hurt the other. Then, eventually recognizing that no real blows had been struck and that their “fight” did not look very convincing, George realized he had been the butt of their joke.

Fred and Gordon had a good laugh at George’s expense.

From the Summer 2010 issue of The Cliffside Chimes.