Dr. Rush Shull, a son-in-law of R.R. Haynes, was one of Cliffside’s physicians from 1912 until 1920 when he moved his practice to Charlotte. He became quite prominent there, and his work in radiology made him known and respected in the medical profession nationwide. 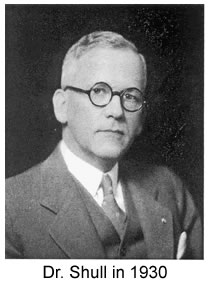 In 1941, at age 54, Dr. Shull had an amazing adventure. The incredible details were written up in the Charlotte papers, and included in his biography. Here’s the full story.

In August of ’41, Dr. Shull was summoned to appear in federal court in Asheville to testify in a disability case. Mrs. Shull accompanied him as far as Marion to visit her sister. Dr. Shull drove on alone. It had been raining for days and it continued to rain as he drove from Marion to Old Fort. Just after passing through the latter town, he ran into a landslide and was forced to turn back.

He stopped at a drugstore in Old Fort to have a Coca-Cola. There, he saw an old friend, Dr. Johnston, and told him of his difficulties. The other doctor insisted that Route 10 to Asheville was always passable even in the worst weather. Encouraged by this, Dr. Shull again set out for his destination. As he crossed a bridge outside Old Fort, he could see that a deluge of water, a flash flood, was coming out of the mountains. However, he kept on going for several hundred yards until he passed a mountain boy.

“Mister, you better get out of that car!” the lad warned. Noticing that the water was rising rapidly around him, Dr. Shull got out of the car and followed the boy along a barbed fence toward higher ground. The current was so swift it was all Dr. Shull could do to hang onto the fence. At the moment the youth reached higher ground and disappeared over a little hill, the rising water swept Dr. Shull and the fence away.

The floodwaters carried him along, buffeting him unmercifully against the wire fence. After what seemed like eternity, he managed to catch hold of a branch of an elder tree growing on the bank. There he hung for one hour and forty minutes. He could not swim, but he grimly clutched the branches and hoisted himself up with each surge of the water. The branches which he held were the topmost limbs of the tree and therefore small and limber. Each time a wave came, he almost drowned but managed to keep his head out of the flood.

After some time, Dr. Johnston, who was making a call in that area, saw Dr. Shull’s car but was unable to locate its owner. Finally, he surmised what had occurred and placed an emergency phone call to a family up the river. These people immediately searched the river and discovered Dr. Shull still clinging to the top of the elder tree. They brought a truck and plow lines and began rescue operations. Two Boy Scouts, who were counselors at a nearby camp, swam the torrent and anchored the lines on the opposite shore. They then assisted Dr. Shull into a packsaddle and he was pulled to safety across the river.

His rescuers drove him to their farm and put the doctor to bed. He directed them to cover him with blankets and a heating pad.

The next morning, old Dr. Johnston was able to reach the farmhouse in his Model-T Ford. He gave the patient—who was suffering from shock, exposure and severe cuts from the barbed wire fence—tetanus antitoxin. The following day, Dr. Johnston took the younger physician to the hospital in Marion, where he began to recover and was moved to his home in Charlotte. Amazingly, a farmer found his glasses unbroken, one mile downstream from the elder tree.

A version of this article appeared in the Jan-Feb 2008 edition of The Cliffside Chimes, newsletter of the Cliffside Historical Society.