More than just a firetruck

More than just a firetruck 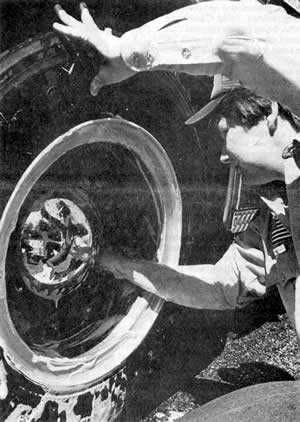 A diesel hum reverberated down the asphalt two-lane of US. 221-A , in front of the fire department. The rest of the firemen stopped talking and craned their necks in the direction of the hum.

A unanimous groan escaped as a tractor-trailer truck rounded the curve and came into view.

It was a nice truck. But it wasn’t a brand-new, $130,000, sky-blue, custom-built, chrome-edged American-LeFrance top-mount pumper with lights flashing and siren blaring.

The next truck to round the corner was.

The firemen jumped and yelled. Phillips looked like a referee signaling the touchdown.

So why are grown men acting like kids at Christmas?

Most folks connected with the tiny, two-bay volunteer fire department will tell you it’s because the truck is more than just a truck. It represents the beginning of a new era of financial security and the end of relying solely on “begging” for money to survive.

About three years ago fire department officials were at wit’s end. Their equipment was outdated. They didn’t have the money to buy fire-fighting clothing for the men. They considered closing the department, leaving residents without fire protection and with substantial increases in fire insurance rates.

That’s when somebody proposed a special tax district to raise money.
“It was an old idea batted around for a number of years,” explained Cliffside pharmacist Cody Newton, a member of the board of directors and spearhead of the tax district idea. “The consensus of opinion was there was no point in trying for it because the community wouldn’t vote for it.

“But it finally came to the tax district, or closing it down.”

While firemen still have to raise money through turkey shoots and hamburger sales, the tax money saved the station.
“It was do or die,” explained fire department treasurer, First Citizens’ Bank vice president William B. Jenkins. “You can’t sell enough hot dogs to buy a truck anymore.

Newton said the fire department got its first tax check in September. With an eight-cent tax per $100 valuation, the average homeowner in the district – a four mile radius of Cliffside – pays about $18 in additional taxes to the department, he said.

“Now the money will be coming in with some sort of regularity,” Newton said. “What it means is we can purchase the necessary equipment like radios, fire-fighting protective clothing and air tanks. People who would not speak to us before will now do business with us on credit.”

The tax money will also free firemen up to train, Newton said. “Before, we didn’t have time to because we were knocking on doors and cooking hamburgers,” he said.

“Cliffside has been needing something like this,” Chief Phillips said, watching firemen washing the road grime from the sky-blue paint. “We’ve been operating with old equipment for a long time.”

“It’s like going from the tube to the transistor,” Newton said. “It’s a big step.”

In fact, the previous pumper was bought by the department 20 years ago. Firemen have been worried they might not make it to the next fire. It will be overhauled and put back in service as a backup.

Besides reliability, the new pumper can deliver more water – 1,500 gallons per minute – and has a shorter response time. A top-mounted control panel affords the operator an overall view of the fire scene.

The one-of-a-kind truck will take 10 years to pay for.

The new truck will be on display at the fire station today and Saturday.

Hot dogs and hamburgers will also be on sale to raise money for the department.

Clipping provided by Phillip White. Reprinted with permission from The Daily Courier.