Family memories through the pages of photo albums

From The Daily Courier

Family memories through the pages of photo albums

A family member handed me a photograph Thursday night of Grandpa Crawford and Uncle Rastus Buckner. They were brothers-in-law. Quite dapper in their suits holding their Bibles as young preacher-boys, they had just graduated from Gardner-Webb College.

The picture must be 75 or 80 years old. I’d seen a similar picture of Grandpa but never one of Uncle Rass I don’t remember knowing he was a preacher, too. 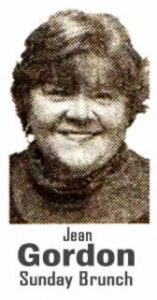 I would have never known that. perhaps, had I not seen the picture. That’s one of the reasons I have dozens of photograph albums. How else would I know?

In addition to my own albums, I have those belonging to my parents dating back to the the late 1940s to 2000.

Captured on the hundreds of album pages are our family, babies, first school days, graduations, weddings, friends, vacations and every other non-event you can imagine.

Without pictures how would I know how it was back then when I was a child holding a baby chicken on Easter Sunday morning in my Sunday dress, sporting a GA (Girl’s Auxiliary) patch on my lapel?

How else would we ever know exactly who was where and when?

One of my fears is not transferring all my photos from my computers and CDs to photo albums. Last year I added approximately 150 to my album I had shot during the year. Finally putting them on a CD I took them to the photo store and had copies made.

My family members store most of their pictures on their phone and other electronic devices and I don’t think it is as easy on computers.

For me it’s much easier to take an album off the shelf and flip through the pages with identifications and dates. Mama labeled all her album by years and then vacations.

There are only a few photos of me when I was a baby. The story goes that after my birth the camera broke and my “broke” parents didn’t get another one until my twin sisters were born. Likely story. I’ve certainly seen plenty of photos of them.

Our camping trips, beach vacations, family gatherings, friends of all ages, are all recorded and the minute I see one of the photographs a flood memories come back to me. Most of the time I can remember exactly what was happening and what was being said at the minute the photo was taken.

How much I was loved and cared for is as plain as a Kodak picture.

I can’t tell you what our childhood pets looked like exactly. But I can flip through the photos and see the pictures of our pig Pork Chop, Sallie our beagle or Tiny the mutt that was so small Daddy would carry her around in her shirt pocket. There’s a picture of that.

My twin sisters had pet calves. Although I do not recall that time in our lives, the pictures prove it.

I wasn’t always afraid of Ferris Wheels as I am now. There are numerous pictures of my sisters and me with an older family member stepping off the Ferris wheel at Asheville Park.

My sister was so petrified of the tigers at the Soco Gap Zoo, she stood so far away from them, she was nearly in the highway. Pictures prove it.

With each passing day it seems, circumstances of life can change. Sometimes drastically and unexpected. Without pictures how would we remember one another?

The fond memories of my childhood seem to fade a bit, but pictures, help preserve them.

My sisters and I grew with aunts and uncles just a few years older than we were. Back then it didn’t seem we were nearly the same age, but it does now.

Fortunately their lives and ours were captured on film in happier days gone by, but regardless of the tough circumstances of life, I will not forget these precious people and the sheer blessings of being a part of such a loving and caring family.

My pictures prove it all.