CLIFFSIDE – Everyone down in Cliffside was all snug on their block, when a man came from Charlotte to dismantle their clock. “I’m just packing it up,” he said, with a grin. “I’ll fix it up there, get it running again.”

Just hurry and bring it back, Cliffsiders say. 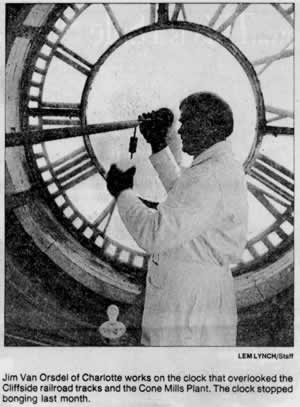 That’s 28 bongs – four bars of four at the top of each hour, plus another 1 to 12 bongs to sound the correct hour – and they could be heard for miles.

Everyone could hear the bongs. They could see the clock from just about anywhere, watching the hands through the Great Depression, World War II, moon landings and the fall of communism.

On Saturday, Cone Mills machinist Joe Fasolino stood at the base of the 51-foot tower, strapped on a safety harness, and laughed about the good times back when he used to sit on his girlfriend’s porch and know it was time to leave when he heard the clock strike 10.

“Tell my wife I was talking about her,” he said in mock fear as he stepped into the boom bucket that would take him 40 feet up to one of the 51/2-foot opaque glass clock faces on each side of the tower.

He turned serious as he carefully removed the cedar minute and hour hands and cradled them.

Inside the tower on the second floor, clockmaker Jim Van Orsdel was twisting and pulling, taking apart gears and chains, universal joints, pulleys and weights.

He and assistant Abe Atwell tagged each piece, put it in a plastic envelope and filled boxes with the parts. The biggest wheels went in pillowcases.

From dawn to dusk, he and Atwell labored in the tower, lowering boxes and parts by rope.

The parts are in The Clock Shop in Charlotte now, the first time they’ve left Cliffside since being installed in the 1920s. In 90 days, they’ll be freshly cleaned, properly fixed and ready to return home.

“Putting them back together is simple too,” said Van Orsdel. “We’ll have that up and running. It’ll look like a showpiece when it gets done.”

It’s a treasured item for the entire community, said Mike Weather, master mechanic for Cone Mills. “Besides the mill down there, this is about all we have left to hold on to.”

Cone Mills employs virtually everyone in Cliffside – 1,100 altogether in Rutherford County – and is spending about $15,000 to repair the clock and fix some of the artwork on the tower.

Inlaid brick spells out “R.R. Haynes Memorial,” a tribute to Raleigh Rutherford Haynes, the turn-of-the-century industrialist who built half a dozen textile mills.

In the 1950s, Cone Mills bought out the plants Haynes founded, and in the mid-1970s, it moved the memorial tower a quarter-mile to stand on his old homeplace.