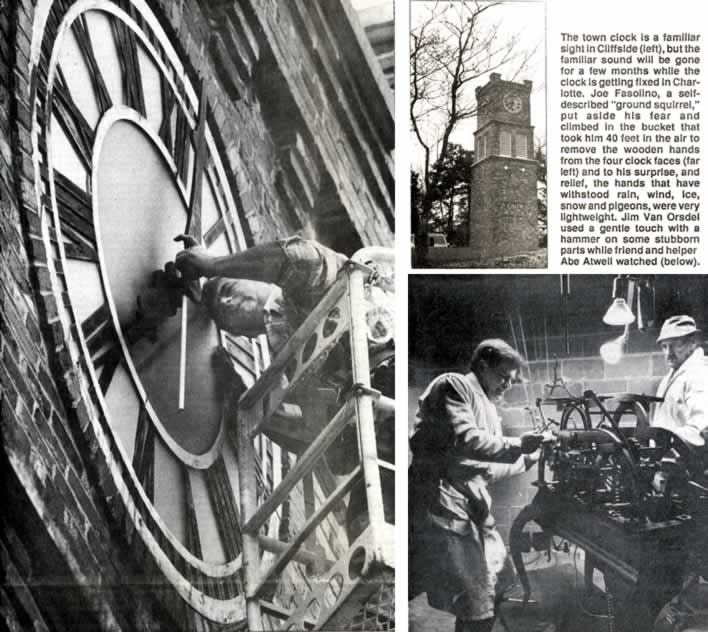 CLIFFSIDE — Growing up here, Mike Weathers didn’t have much use for a watch. But he was never at a loss for the correct time.

But that venerable machine has been out of whack lately. After nearly three quarters of a century it started losing time and, finally, one day it just quit. Weathers, Cone Mills Cliffside plant shop manager and one of the clock’s caretakers, called Charlotte clockmaker Jim Van Orsdel to the rescue. Van Orsdel has established a superb reputation for bringing old, tired relics back to life.

Van Orsdel visited a few weeks ago and fell in love with the “functional artifact” on the hill. “When can I start?” he remembered asking eagerly.

The surgery began last Saturday. Van Orsdel spent most of the day on the second level, the level containing the heart of the clock – the nuts and bolts and gears and chains that move the hands on the clock faces on all four sides of the tower every minute.

As he took the small dial face off the master secondary system — about 20 years ago they stopped calling it the master slave system — he talked about what a treasure these old clocks are.

“There are clock collectors in the field who would pay four or five hundred dollars just for this little assembly here,” he said, pointing to the hand-painted dial.

To every piece Van Orsdel took off, he attached a little, rectangular gold nameplate, so he’d know how to put it all back together. He took it all apart, lowered it by ropes and took it back to Charlotte, where he’ll work on it in his store, “The Clock Shop.” In about three months he’ll bring everything back, good as new, and put it all back together. The original artwork – the gold-leaf striping and flowers that are now painted over – will also be redone. “Once people figured out how to make clocks, they then became an art form” in and of themselves,” Van Orsdel said. “They didn’t really have to make them beautiful.”

This is the first major overhaul Cliffside’s clock has had, so some pieces held fast and required a lot of elbow grease to break them loose. “Clocks not taken apart for years and years can be as stubborn as they can be,” Van Orsdel said, with admiration.

Van Orsdel loves his trade. He got into clocks about 20 years ago as a hobby and as a full-time profession 12 years ago. He has traveled all over, working on clocks. He cares for all the clocks at the Biltmore Estate, where there are two town clocks.

“Every time I get into an old clock like this, I get back into the time era of when these clocks were made,” Van Orsdel said. “It bridged the communication gap for the whole I community.”

And people have fond memories related to clocks, he added. “People will tell me, ‘I remember the clock my grandmother had on the mantel.'” But there was a time when clocks were a luxury in the house and people relied on town clocks and their familiar chimes.

E. Howard and Company in Boston made the clock. The system was designed in the last century but the John Hancock Building in New York and the Wrigley Building in Chicago still have the same system. When Howard built clocks like the one in Cliffside, they were guaranteed to lose no more than a minute a month within five years.

“Other people made good clocks, but Howard did the next step above – the cadillac of clocks. They can’t afford to build them like this now,” Van Orsdel said. People stopped making clocks of this type around the 1940s, with the advent of electric clocks.

Cliffside’s clock was converted to electric probably around that time. Before then it had to be hand cranked once a week, an arduous process, Van Orsdel said.

The clock was originally in the Raleigh Rutherford Haynes Memorial Building in downtown Cliffside. Haynes, born in 1851, developed the Cliffside Mills in 1901. In 1908 the largest gingham mill in the south was in Cliffside. In 1922 the memorial building was dedicated. In it was the town library, a theater, barber shop, beauty shop and boarding house. And the town clock. Joe Miller, manager of World Class Manufacturing at Cone, remembered “when the bells chimed, the bed would shake.”

The hands are gone from the faces now. The bells are silent. But soon they will chime with new vigor.

“We see things change all around us,” Van Orsdel reflected, “but the old clocks keep on telling you what time it is.”

Read another story about this restoration, from the Charlotte Observer.