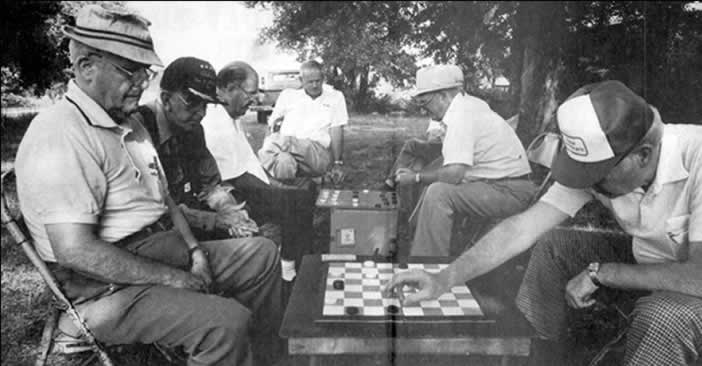 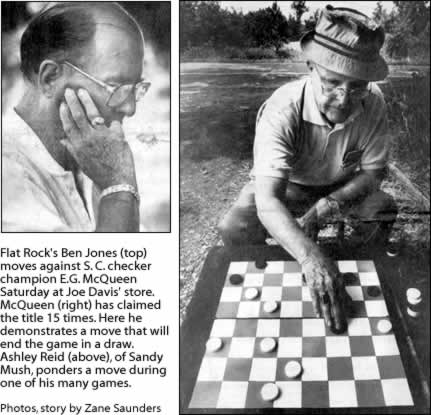 CLIFFSIDE – For serious checker players, Joe Davis’ store on Old U.S. 221-A is the place to be on Saturdays.

The store, a stone’s throw away from the South Carolina line, has been home to checker games since it was built in 1928.

“They started out with sody-water caps. Different ones. If they got a king they’d turn it up or turn it down,” Davis said as he padded back and forth between the players and the tiny store to fetch a Coke or chairs for spectators.

Now, even though the checker boards are still set up under the oak trees like years ago, the game has gotten more sophisticated. Go-as-you-please has been replaced by three move restriction. In that game the first three moves are determined by a chance draw from a special card deck.

And the level of play is more sophisticated as well. Of the dozen or so men who meet here regularly there are three who can claim bragging rights to the South Carolina state championship and two who are Cleveland County champs. Several have squared off against a string of world champions.

“I don’t know of another spot in North or South Carolina that would play this caliber of checkers all the time,” said E.G. McQueen, 76, a retired Pacolet, S.C., hosiery salesman. McQueen would know. He is the current South Carolina champion – a title he has claimed 15 times over the years – and has finished second more times than he can remember.

“A lot of people think checkers is a simple game,” McQueen said. “And a child can play it, but a genius can’t master it.”

He plays both checkers and chess and says checker players have been stereotyped as cracker barrel bumpkins. The public has been hoodwinked into believing that chess is more intricate than checkers and “nothing could be further from the truth,” he said. Checkers is just more subtle than chess, he says.

Ashley Reid of Sandy Mush agreed that checkers is far more complicated than it gets credit for. “This game’s a lot like music or anything else. You’ve got to have a lot of natural talent. You can’t develop it.”

“They say that if 40 million people could play a game every 10 minutes, 10 hours a day, 300 days a year, it would take 1,600,000 years to play all possible variations,” McQueen said, the figures rolling off his tongue easily.

Nearby, two players finishing a game bicker about the outcome. One accuses the other of capturing two men when only one, in his opinion, should have been taken.

“This is serious business,” commented Reid. “There’s no money that changes hands but most of ’em would rather lose a finger than lose a game.”

Even though they take the game seriously, “It’s a pastime,” said Marvin Ledbetter, reigning Cleveland County and Shelby champion and the man accused in the argument. At 57, Ledbetter is one of the youngest players in the group.

“We get a lot of fun out of it.” he said. “Checkers is a mental game. You like to beat someone. Every checker player hates to get beat.”