Back to Story Index 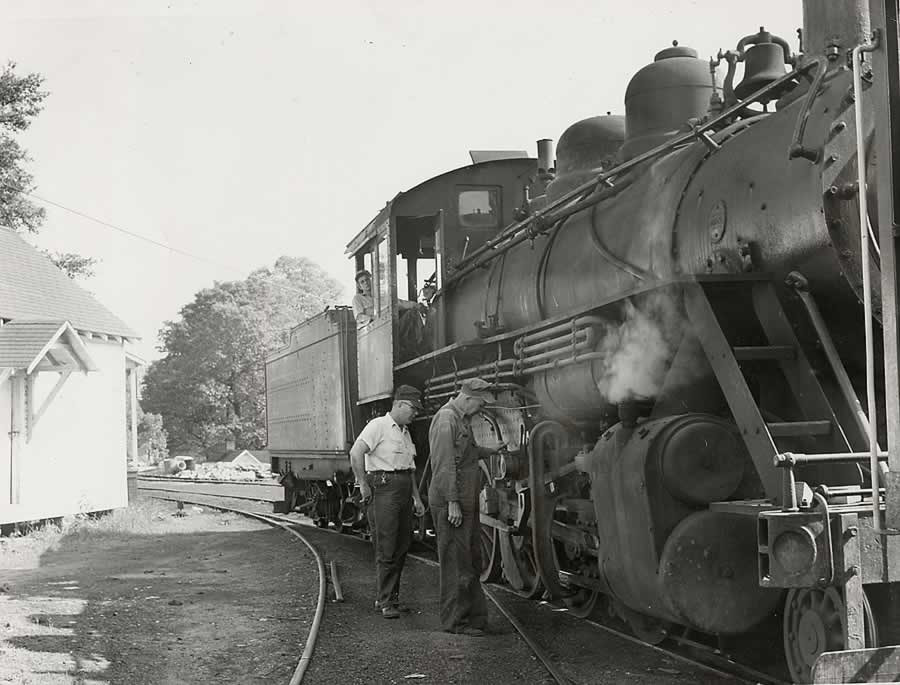 Crew looks over Cliffside Railroad locomotive during break in day’s freight hauling. Railroad is believed to be last in state using steam locomotives which will be replaced by diesels when they wear out. That’s Fireman Bud Padgett in cab. Conductor Shaw Biggerstaff (L) is on ground with Engineer L. O. Biggerstaff. (Observer Photo—Gardner).

CLIFFSIDE — The almost lost huff-chuff sound of a steam locomotive picking up speed echoes regularly in this Rutherford County village.

This is home base for a railroad company with two steam locomotives.The coal burners haul goods along three and seven-tenths miles of track.

The engines spell each other — one does the five-day-a-week chores while the other gets a checkup.

They belong to the Cliffside Railroad Co. and probably are the last steam engines in regular service in the state.

The company was chartered in 1905. It has track from Cliffside to Cliffside Junction and on to Avondale.

The line hauls raw cotton and supplies to the huge Cone mills and their surrounding villages in Avondale and Cliffside. It then takes the finished products to the tracks of the Seaboard Airline railroad at Cliffside Junction.

The road — with a scheduled run every day except Saturday and Sunday — handles from 40,000 to 50,000 tons of freight each year.

Once it was even in the passenger business. For 20 years after the line was chartered, it was about the only way a traveler could get in and out of Cliffside.

Three cars filled with customers paying 10 cents a head made trips daily to make connections with the Seaboard.

The service was halted in 1926, after good roads and automobiles absorbed most of the passenger traffic.

Prominent Carolina businessman B. D. Heath of Charlotte was the line’s first president. Vice president and treasurer was the colorful textile baron R.R. Haynes. It was Haynes who built the mill at Cliffside and for whom the Avondale plant was named.

The general freight agent when the line was formed was John M. Scott. He later became president of the Charlotte National Bank — now a branch of Wachovia Bank and Trust Co.

The line has been and continues to be a moneymaker — even on steam.

“The Interest on the money it would take to buy a more efficient diesel buys the coal,” H. M. Owens, current secretary and treasurer of the line says.

Like many of Its larger counterparts, the little road has its own legends.

In the line’s early days, according to Owens, the engineers and other crew members were recruited from Cliffside’s available labor force. Few had but a passing acquaintance with locomotives and accidents were frequent.

At about this time, a young man applied to Mr. Haynes for a job as engineer. The applicant went to great lengths to outline his ability to run a locomotive.

Haynes, keeping in mind the accident rate, finally interrupted the discourse. “Young man, we have plenty of people who can run the train. What we need is someone who can stop it.”

Another favorite concerns one-time fireman Van McOpsom and the bantams. Back in the 30s, as one of the trains was bearing toward the junction, McOpsom spotted a bantam hen and three chicks scratching about, on the right of way.

The train was halted for McOpsom to gather in his find. He made a nest of them in the tender, and promptly named them all.

The hen was dubbed Bessie, for Mrs. Walter Haynes, one of Cliffside’s leading ladies. The offspring was called Charlie, for Cliffside President Charles H. Haynes; Maurice, for Maurice Hendrick, general manager of the mill, and Hollis, for H.M. Owens.

When the train would pull into the shop for a respite between runs, the hen and her brood would flap to the ground and start foraging.

But when the whistle sounded, the bantams would come running, ready for another ride.

Owens—the line’s historian and an avid fan of railroading—says the steam engines draw visitors from all over the country. A story in a magazine for train devotees brought mail from throughout the world.

The steam engines are now over 30 years old. “When the time comes and these steams are no longer able to do the work, we’ll have to get diesels,” Owens explains.

You can tell by the way he says it that he hopes it will be a while yet.