This is a partial listing by street of households in Cliffside from July 1944 to December 31, 1946. It tells the house number, the head of household, the date the householder moved into the residence (if the move occurred within that 2 1/2 year period) and the date they moved out (if they did). 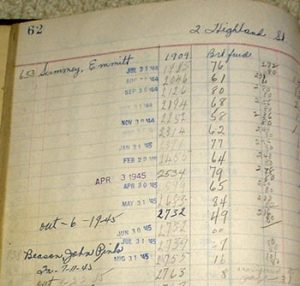 This information comes from a set of ledgers in which the Company kept track of power usage (in kilowatt hours) by each household.

Cliffside Mills charged its customers the going rates used by Duke Power (from whom the company purchased much of its power at bulk rates), and deducted each household’s charges from the tenant’s paycheck.

Unfortunately two of the four ledgers are missing, therefore information is unavailable for houses on or west of Main Street (North and South). Nor is the Fairview neighborhood included; the ledgers indicate that the Fairview line had been “sold to Duke Power.” So, much to our disappointment, only 21 Cliffside streets and areas are represented (see Navigation table below)

What’s revealed in these lists is how Cliffside was somewhat like an ant hill. Some families were fairly mobile, moving from one house to another, in several cases to houses a door or two away. Some streets, like Reservoir, were very stable, with very few families moving around (at least in those years). Others, like Valley, seemed to be way stations to somewhere else. Four of its seven houses had three or more changes in tenants over the period. To the poor soul in the Company whose job it was to maintain these ledgers, all this moving around must have been maddening, like herding cats. Here’s how to read the lists.

Another interesting revelation is the electric power usage of the time, specifically how little was used and how the Company calculated its costs for each family. For an example, read this.

You can find the exact location of the streets and houses by viewing the 1942 town map.

To view a specific street, click its name in this table.

The ledgers containing this information are from the Phillip White/Wayne Smith Cliffside Archives. 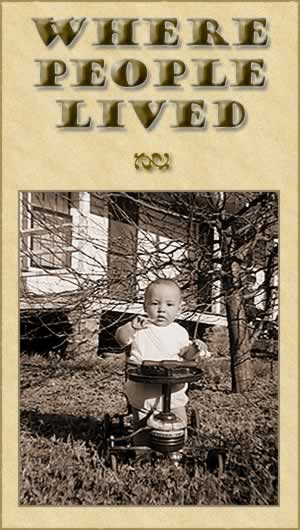