Lieutenant Joe Foch Compton was killed in action December 26, 1942, somewhere in the Southwest Pacific area. The first word received by the family in regard to his death was on

January 29, 1943, when two letters addressed to him were returned marked, “Killed in Action.”

Mr. and Mrs. Compton received official notice from the War Department of their son’s death. Lieutenant Compton (1919-1942) and his twin brother, Lieutenant John Pershing Compton, also of the Air Corps, were born May 8, 1918, in Spartanburg County, South Carolina. They were educated at Cliffside High School and at Boiling Springs Junior College; each had two years at Wofford College.

Both took a CAA course at Wofford, and they entered the U.S. Army Air Corps in May of 1942. Lieutenant John Compton was overseas, a bombardier in the Air Corps. Lieutenant Joe Compton was sent overseas last August. (Rutherford County News, February 25, 1943) 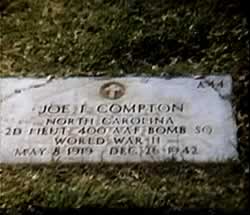 Joe Compton rests in the the National Memorial Cemetery of the Pacific in Punch Bowl Crater overlooking Honolulu, Hawaii, along with over 46,000 fellow service members and veterans. This is a frame from an 8mm home movie made in 1956.

From Real Heroes: Rutherford County Men Who Made the Supreme Sacrifice During World War II, by Anita Price Davis. Copyright © 2002 by The Honoribus Press, Spartanburg, SC. Reprinted with permission.