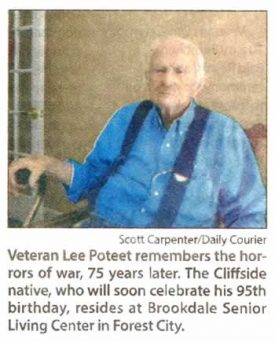 FOREST CITY—United States veteran Lee Poteet enjoys his life at Brookdale Senior Living Center. He will be 95 years old on Dec. 9. He talks with his friends at mealtimes. He sometimes goes on outings to get apples in Hendersonville or take an October hayride. He spends a lot of time with his stepdaughter Burma and her husband Steve Poteat. who is also a cousin of Lee.

When serving in the U.S. Navy, Lee had experiences that have remained with him for 75 years. He joined the Navy in 1939. The Cliffside native was a teenager at the time, working for 25 cents per hour at a cotton mill.

“I didn’t want to do that forever, so I joined the Navy,” he said.

In 1942, he had volunteered for armed guard duty aboard a Merchant Marine ship. The ship was heading to a port on the Amazon River in Brazil to pick up supplies, when two German sub¨marines torpedoed the ship about 1,275 miles from land.

He was one of 29 who originally boarded a life-raft and spent 18 days drifting in the sea. There were a few provisions taken onto the raft, a limited amount of water and canned food.

Lee said they each consumed small amounts of the food and water. They were able to catch some fish, flying fish which fell into the raft. Even so, all the men who made it to the raft did not survive.

“It was pretty horrible,” he said. ‘Though I tried to forget, you better believe I still remember.”

Some of the men who made it on the raft were severely injured and could not survive without medical care. Once a fellow soldier died, the others on the raft decided to bury the bodies at sea. Sharks following the raft consumed the bodies.

“We were trying to survive. And we were scared,” Lee stated.

“It was hard, because they would get killed,” he said.

On the raft and facing uncertainty and death, Lee said he and the others thought about a lot of different things. And they lost weight.

“One thing I remember is food cravings. The main thing I really craved was green beans,” Lee stated.

Lee said during that time, he does not recall thinking death was imminent for him. He does remember praying. And sometimes he has even wondered why he was among those who survived.

“I guess the good Lord wanted me to stay around here for a while,” he stated.

Eventually the soldiers in the life-raft could see land. And then a nearby fishing boat saw them, and took them aboard and on to the Brazilian mainland. The survivors were flown from Brazil to a hospital in Miami and from there to a Naval hospital in Brooklyn. 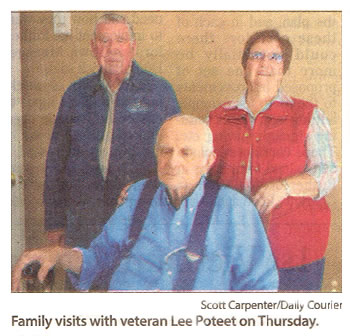 Eventually Lee was on another assignment, on another ship. That ship, traveling with a group of other vessels, was also sunk by the enemy. But this time, the survivors were only in the water for an hour or so before picked up by the other ships in the area.

As veterans are remembered and honored throughout Veteran’s Day weekend, Lee said he would certainly encourage others to join the military.

Burma says she expresses great pride in her step-father.

“He was a godsend for my mother. We love him dearly,” she said. Betty’s mother, who was Lee’s wife, died about 11 years ago.

Steve and Burma visit with Lee several times each week. A veteran himself, Steve is pleased to see services improving not only for Lee, but for all veterans.

“Things are improving all the way around for the veterans,” he said. ‘The hospitals especially, are much better than they used to be.”