Mack Hendrick of Elkin likes to tell a good story. When the 77-year-old veteran starts a yarn about the time served overseas, he usually gives the tale an amusing twist. Even in describing his injuries, he uses a dose of humor. 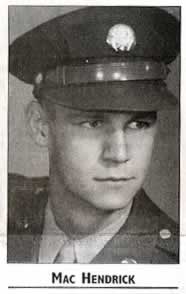 “I weigh more from shrapnel than anything else,” Hendrick said with a laugh.

Growing up in Cliffside, Hendrick was in school at North Carolina State University when he enlisted in the Army Air Corps in 1943.

“Back then getting into college, you didn’t have to take the SATs. You pretty much were admitted if you graduated from high school,” he said. “So my high school principal called me and said, ‘Mack, they want me to send a transcript of your grades. You want me to include your French grades?’ And I said ‘No sir!’”

That French—or lack of it—came in handy for a young serviceman in the 378 Regiment as the 95th was making its way across France.

So I went to the lady who owned the house—I don’t think I even knew six words—but I said ‘Captain desires a “chamre” for the night.’

“So she said, ‘I will let the captain have my room.’ And she pointed at me. She thought I was the captain and I didn’t correct her. At least it got me off guard duty that night.”

But soon the harsh realities of what the young man experienced surfaced and the seriousness of the war is made very clear to all who listen. 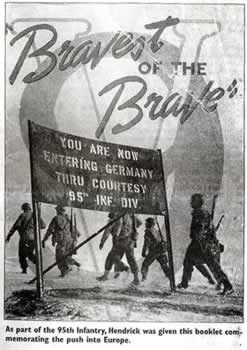 “A lot of it was funny-type stuff, but it was pretty serious business for the most part,” Hendrick said. “I don’t go to war pictures any more. It bothers me because they glorify it and you got a bunch of boys 18 years old—I was 19 at that time—but boys that age are the ones going in and doing the fighting. It’s just not good, not a good situation.”

Hendrick—known as Slim for his tall frame and compact physique—shipped out to England before his basic training was even finished. He spent a month there before crossing the Channel to Omaha Beach in Normandy, France—three months after D-Day.

“One of the biggest impressions I have of the whole thing as we pulled up on Omaha Beach, I looked at that and said I don’t know how anybody could possibly get off of there alive,” Hendrick said.

Hendrick described the 150 yards of barren beach as covered with the land mines and the cliffs above, fortified with machine guns, daring invading troops to come ashore.

“I remember when we walked up the hill going up to the top there was a cemetery started over on the left side.”

Hendrick’s regiment did not see much combat in the early weeks of their assignment. They crossed the Mozelle River and pushed toward Metz, taking forts as they on them.

“…which was no big deal because the Germans had seen us coming and they had run,” Hendrick explained.

Hendrick did see plenty of evidence of previous combat however on the march. “On the way to Metz I saw this body of a man, I didn’t have any idea who it was,” he said. “A mortar shell had hit him square in the back—but I found out later on he was a good friend of mine.

“Things like that sort of stay with you and it’s not pretty. I’m not anti-war, but I don’t want them sending my boy or my grandson.”

As the troops got closer to Germany, things changed.

“After Metz, we started for Germany,” Hendrick said. “We got near the Saar River and I got hit. An artillery shell exploded 10 feet away. sprayed me, broke both my legs, hit me in the hip, hit me on the back, punctured my lung, and stopped against my hip.”

Hendrick recalled telling his companions to go on and send a medic back for him. He could see his legs were pretty badly injured, but was not in pain. He did not know at first the the shrapnel had also entered his back. “I wanted a cigarette, he said, “so I opened a fresh pack of Chesterfields and that’s when I realized I had been hit in the lung. took a drag and it hurt. I put my hand back there and it came away all sticky.”

Hendrick believes he waited 40 minutes to an hour for the medic to pick him up. As shells continued to fly over him, he said he thought he would be killed. If it wasn’t for the doctor in the field hospital that attended to Hendrick, he may not have his right leg today. The shrapnel went in from the back and came out the front breaking both bones in the right leg, and one bone in his left. The scars visible 58 years later retrace the injury and subsequent surgeries.

“By all rights he should have lost his right leg—it was shattered,” Avis Hendrick said. “But the doctor in the field hospital said, ‘I believe If my brother were here he would save that leg.’ He had a brother that was a doctor. And Mack said, ‘I think that doctor treated me just like I was his brother and he did everything he could.’ And he did save it.

Hendrick spent the next few months in a hospital in England and then was shipped back to the states to a hospital in Augusta, GA. As a recuperating soldier, life was much different for Mack than his wife Avis during the war. 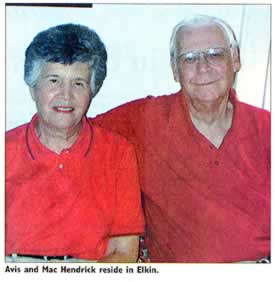 Avis Hendrick was in seventh grade in Rutherfordton when the U.S. entered the war. She recalled sitting in the drug store owned by her friend’s father, drinking a Coke, when the father had gotten the news.

Although she does not describe those years as uncomfortable, despite the rationing and going without, she can still feel the intimate impact of the war on the little town.

“One thing I remember about the war,” she said, “we used to go to the courthouse on Monday and watch the guys leave.”

The war came home to Avis Hendrick through stories a family friend would tell about his experiences.

“A good friend of our family had asked my father to watch over his wife,” she said. “He was wounded in Europe. He said that when some Germans were surrendering, they came across this hedgerow and the last guy that came through had a machine gun and he was just mowing the Americans down.

“Well he got hit, but he said he fell to the ground and they would come around and make sure everyone was dead. He said, ‘I played dead, I didn’t even breathe.’

Avis Hendrick remembers the little coupon books enabling her family to purchase sugar, shoes, and gasoline. Her mother had two pair of nylon stockings she kept in a glass jar with the lid tightened down so that air would not rot the precious commodity.

“GI’s used to carry nylons with them,” Mack Hendrick added, “you’d get them at the PX and trade them to the ladies of the town wherever they were.”

Cigarettes were also in short supply for the folks back home. They had to practice blackouts when everyone would turn their lights out as a siren blew, Avis Hendrick said.

But sirens again filled the air in Rutherfordton to announce the war’s end.

“The day it was over we had fire truck sirens, everything, a big parade, a big celebration that day,” Avis Hendrick said.

“We didn’t have that in Cliffside,” Mack Hendrick countered.

“We didn’t have a fire truck,” Mack fired back.

Mack and Avis shared a bond through marriage—Mack’s uncle married Avis’ aunt. But it wasn’t until their cousin’s wedding that the two struck up a relationship. The couple has been married 51 years.

Mack Hendrick was honorably discharged in 1946. After the war, he finished his college education at NC State in 1949. He laughs that his bachelor’s degree in textiles took seven years. But to Americans at that time, it could be no other way.

“It was not unexpected that we would get into the war,” he said. “Everybody was behind it. Very much like Sept. 11.”