Dog tag travels around world, through decades to a reunion

In 1943, when Grover Haynes, Jr. lost his U.S. Navy “dog tag” half a world away from his Cliffside home, he never dreamed he’d see it again.

But it was returned—46 years later—after traveling from the island of New Caledonia in the south Pacific, to Florida, Massachusetts and Rutherford county where, eventually, it was restored to its owner. 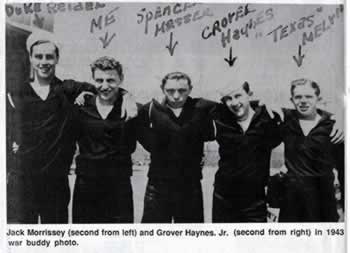 Haynes had dropped out of Clemson University in December, 1942, to join the navy and was given the dog tag when he finished boot camp.

From there he went to signal school in Indianapolis, Ind., where he became friends with a navy serviceman, Jack Morrissey of Pepperell, Mass., who was a key figure in the dog tag’s return.

The two friends had pictures made together before Morrissey was sent to duty in the Atlantic and Haynes to the Pacific.

“I went to San Francisco,” Haynes said, “and was sent our on a transport ship, The Mount Vernon, and made a trip to New Caledonia. I wanted to stay, so I asked for and was granted a transfer to the signal tower and stayed until the latter part of 1943.” 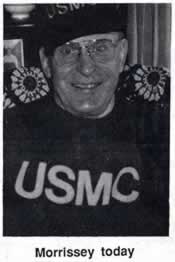 New dog tags had been issued to him before he left the United States but he carried his original tags with him to the island. He says he has no idea when nor where he lost them.

For the remainder of the war he was assigned to a mine-layer, which was bombed at Iwo Jima.“We were almost sunk so it was towed back to Guam, where it was determined to be irreparable, was decommissioned and sunk.”

After the war Haynes returned to Clemson and married his Cliffside High School sweetheart, June White, who had graduated from Winthrop while he was in service and taught school. She continued teaching while he went to Clemson and earned a degree in engineering.

From then until three years ago the couple, and later their sons, Phil and Bruce, moved, first to Colorado, then to Lakeland, Fla., Wrightsville Beach, Asheville and Greenville, S.C.

In Greenville Haynes had his own firm as a consulting engineer, and for 10 years they lived at their lake side home in Saluda and commuted to work. Three years ago they retired, and began making leisurely trips in their motor home—to Canada, Arizona and other states. 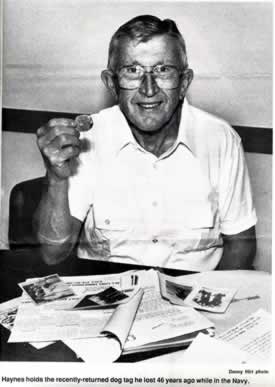 A year ago, a couple unknown to Haynes—Sam and Amine Viverito of Temple Terrace, Fla. —re-visited the Viverito’s old World War II station, which led to a series of events and the return of the tag.

The Viverito’s were in a bar in Noumea, the capital of New Caledonia, when a French policeman approached, found out they were Americans, and gave them a dog tag he had found. They brought it home and began a year-long search for the owner whose name was imprinted on the tag.

As a last resort Viverito placed an ad in the Veterans of Foreign Wars magazine, asking anyone who knew Grover Cleveland Haynes, Jr. to contact him.

When Morrissey read his copy of the magazine, the name sounded familiar—even after 46 years. He recalled his friend of World War II days had lived in Cliffside, NC, and he wrote a letter and mailed it to the police department in Cliffside. The letter was forwarded to the sheriff’s department in Rutherfordton, where Chris Epley, the sheriff’s administrative secretary, went to work tracing Haynes.

It was not difficult. A phone call to Cliffside determined that he was a grandson of the late Raleigh Haynes, who had established the town and the mill, and that Grover Haynes’ sister, Hazel Bridges, still lives in Cliffside.

“I was born on the site where McKinney-Landreth Funeral Home is now,” Haynes jokes, “so I came into the world and I’ll go out on that same place.”

Bridges gave Epley his Saluda address and the packet of information went to him, and correspondence and phone calls went between Haynes, Morrissey and the Viverito’s.

Sometime in June the Hayneses will go to Massachusetts to visit, and to catch up on the intervening 46 years, and they’ll see the Viverito’s on their next trip to Florida.

Now, Haynes says, “there’s one loose end. I’m going to write to the police in Noumea to see if they can find out who the policeman was who returned the tag and write him.”

Haynes is still surprised about the events. “I don’t know what the odds are that I’d ever get my dog tag back, but I figure about the same of my winning a lottery. ”