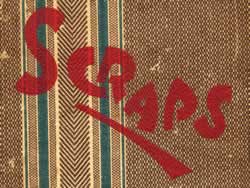 Early in the war, in a house on Church Street, a teenager named Laverne Ingram (daughter of Harry and Meredith and brother to Jimmy and Harry, Jr.) began keeping a scrapbook to hold the news clippings of Cliffside servicemen and acquaintances from other towns who had gone to war.

Whenever one appeared in the Forest City Courier, she would save it and affix it to a page with tiny strips of adhesive tape. She also saved patriotic poems written by or for servicemen.

Laverne married Ralph Simpson and they live in Charleston, S. C. Asked why she kept the scrapbook, she said “that’s what teenagers did in those days, make scrapbooks.”

You can browse through the 21 pages of clippings with the navigation baror find servicemen by name in the index.

These links will display the page containing the person’s clipping.