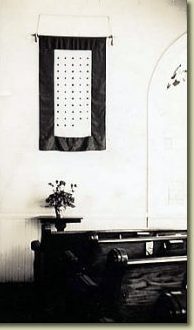 They were everywhere during World War II. From the one- to four-star versions (right) that hung in the windows

of servicemen’s parents’ homes, to the multiple-star flags (left) in Cliffside Methodist Church, showing that 53 sons and daughters of the parishoners had gone to war.

If a serviceman had been killed, his blue star was replaced by a gold one.

It was common in churches to display a group of framed photographs of those in service. The one below is from the Cliffside Methodist Church sometime during the war. 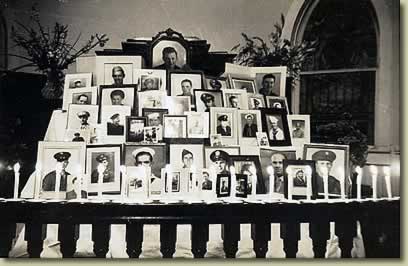 “The Purple Heart is awarded to members of the armed forces of the U.S. who are wounded by an instrument of war in the hands of the enemy and posthumously to the next of kin in the name of those who are killed in action or die of wounds received in action.”

Read a history of this combat decoration.

This particular medal was awarded to the parents of Meldean Fraser, USN, the first serviceman from Cleveland County to be killed in World War II. He was a seaman on the USS Pecos, an oiler (fuel ship) that was sunk by the Japanese on March 1, 1942 in the Java Sea. 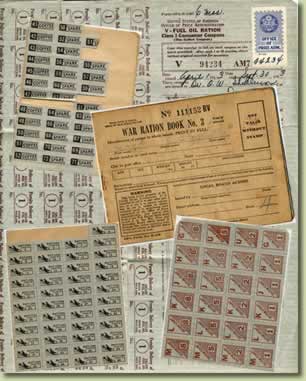 “For a people almost totally unused to any kind of wartime sacrifice, WPB Directive No. 1 to OPA, January 1942—instituting rationing—came as a shock. Suddenly, U.S. citizens were stuck with a mess of little books and stamps that limited the food or gas they could buy. What’s more, the instructions on how to use the food stamps seemed incomprehensible:

The little books were sort of a pain to Cliffside people, but the shortages were worse. Gasoline, tires, shoes, coffee, sugar, and many other items were hard to get. Remember the occasional car or truck grinding down the road, running on rims? And those “A” stickers on windshields (which limited the car’s owner to about 3 gallons of gas a week)? Some women, bless their hearts, resorted to the faddish “painted on” stockings—leg makeup—to replace those no-longer-available Nylon hose.

We were lucky in some respects. Living in a small town, most of us had relatives or friends who lived on nearby farms, and had beef or pork for sale or barter. And nearly every family was able to have a garden to grow their own fruits and vegetables, much of which they preserved at our “municipal” cannery. Milk, eggs and butter could be had from peddlers from the countryside, such as Florence Bailey, who came to town from the Trinity community about twice a week. Her client list included the Holloway White’s, the John Tinkler’s and many more. If you weren’t home, no matter, she would enter your unlocked house and put your order safely in your icebox, or— if you were more affluent—your Frigidaire or Kelvinator.

To read more about those times, Google search for “WWII Ration Books.” 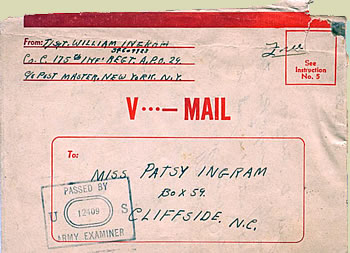 Ever wonder about those small, flimsy letters you run across in your memory boxes? The ones with “V Mail” printed across the envelope?

Both the address and the message were contained on a single sheet of lightweight paper.

During the war the military and Post Office Department used this method to reduce the bulk of mail, conserving badly-needed space on trains, ships and planes. The 37 mail bags required to carry 150,000 one-page letters could be replaced by a single mail sack.

On the envelope, notice that “.  .  .  —” symbol? That’s Morse code for “V” (for Victory). The “Passed By” stamp meant the letter—from Army Sgt. Bill Ingram to his daughter Patsy—had been read by censors, and any vital information, such as troop movements or other military secrets, had been blacked out, just in case Patsy was a spy.