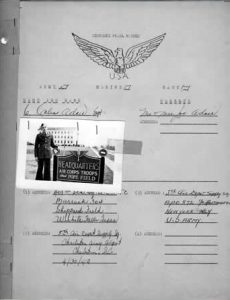 All during the war, there was kept in the town library several notebooks containing a page for each of the town’s servicemen. On the page was his picture, his parents names and his last known address. The purpose, we can only assume, was to provide that address to anyone who might want to write a soldier or sailor.

These notebooks languished in the library for decades, out of sight, out of mind. In the 1970’s, knowing the Memorial Building was to be demolished, the county library committee (of which Phillip White was a member) had acquired a site for a new facility in Avondale, to be called the Haynes Library. The contents of the Cliffside library would be transferred to the new one.

The pages and photos were originally in at least two big three-ring notebooks. I looked at them several times there. Sara Hamrick was the librarian. While moving materials Mrs. Hamrick told me again about the notebooks and that they would probably not be used in the new library, I should get them. I told her I would get pick them up the next day. Of course, the next day they were gone, someone else had taken them, we didn’t know who.

Fast forward a few years: Someone, I don’t remember who—it may have been Frank Holtsclaw—brought a box (approximately 9 x 12 x 4) of papers by the school. He said he got them at the convenience center (dumpster) and they were about Cliffside people. I glanced at the top two or three and saw that they were some of the pages from those notebooks. I put them aside and forgot about them for awhile. Judson Crow was visiting one day and I let him take some material with him, including the box. Judson came by my house this fall (2009) and returned some material he had borrowed including the box. I had been retired 5 years!

So, another instance of historical material barely escaping the landfill. Our thanks to Phillip for sharing this material, and to Mrs. Judson Crow for scanning the 78 photos and clippings shown in this image gallery.