1 The year may have been 1917 when Raleigh Rutherford Haynes’ tomb was built. Or perhaps it was a year or two later. Haynes was buried in Cliffside Cemetery on February 9, 1917, in a temporary grave site. Also in that year, the remains of his two wives, who had died several years earlier, were moved to Cliffside from Floyds Creek Church. 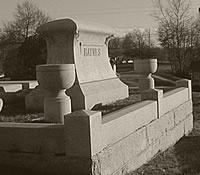 That summer, or in one soon to follow, the big marble tomb was erected, in which the bodies of all three were buried.

The first five photos in this sequence were provided by the family of Press Freeman, a stonemason known around Cliffside for many years, who was instrumental in the building of the tomb. Freeman worked on the Mill’s construction crew that in the early part of the century had built the mill itself, the dam, and other structures in the village. His son, Clyde Freeman, lived in Cliffside and worked for the mill briefly in the thirties. Clyde later moved to the Rutherfordton area and ran a timber and lumber business. Both he and his wife are deceased. Clyde’s son, Ron, provided these photographs.

Our thanks to Jim Ruppe, of Rutherfordton, who acquired most of these photos from Ron Freeman, wrote the descriptions, and took recent photos of the locales for this presentation. The original photos are marked as finished by the “Hames Studio, Cliffside, N.C.”

Over the decades the Haynes gravesite has been a favorite background for Sunday strollers' photos. It was—and is—a reminder to generations of the great man's role in Cliffside's legacy.