His thoughts then? Here they are.

I just want to say that I know full well that some of these days I shall have to give up this life. All of us will have to, how soon none of us can tell, and it is no doubt best that we do not know.

I want to say in this connection that I feel that I have done my duty to my family and loved ones and to my country. It is true that I have had many obstacles, but I have discharged my duty as best I could, all things considered.

My conscience is clear so far as my treatment of my fellowman, and in every way, I hope my country will not be any the worse by my having lived as long as I have in this world.

I hope too, that the undeveloped plans I have laid may all some day be complete and the country be blessed and benefited by them, and that my friends and loved ones be blessed in many ways, and that they be better men and women and that they too can and will serve their country as best they can, and serve each other in a way that is right, and we all may meet by and by up yonder where we can live as an unbroken family in Heaven.

There are many more things I would like to say or write but probably it is just as well to only say this much.

If they should outlive me, I would like that at least the following persons be allowed to speak of what they know of my life and character at my burial in the hope that it might do some good to at least some of the young boys that will have to take the places of us that will have to pass away sooner:

With love to all,
R. R. Haynes

This letter was not found until a number of days after his death, and the persons indicated were not advised, though some of them were present at the burial.

Clyde Hoey, of Shelby, among those mentioned, had been associated closely in a legal way with Mr. Haynes for some 20 years.

Summing up his estimate to me of Mr. Haynes, Mr. Hoey said: “I think the two dominant forces for success in Mr. Haynes’ make-up were his mastery of detail and his foresight.” Then passing on to another side of his subject, said he: “To illustrate the kindly tact that kept him well-loved among his people at the village, one day he and I were passing the fountain in front of the company offices where there was quite a number gathered. Mr. Haynes, going near, found two young men busy at a game of checkers. He believed in everyone attending to business during business hours and had not heart for untimely idleness, but he did not reprove. He simply said, ‘How long will it take you to finish that game?’ Then, when answered, he added, ‘Well you can finish that game.’ That did the business and there were no bad feelings.”

His key to success

Let me see to what Mr. Haynes attributed his success. Here is a note undated, which was found:

Sometimes people ask why did I succeed. That is easy enough; I endeavored to be truthful, honest, and pay every cent I owed, always keep at something, have plenty of energy, not give up, and then most of all not engage in anything that I could not go to God and ask him to help me and I did not since I joined the church and I have gone to him often for help and I found it.

I never engaged in anything that I could not go to God and ask him to prosper that business as He thought best, and my advice to all is not to engage in anything and not be willing to ask God’s help.

Wrote this on train with my Testament open 300 miles from home. 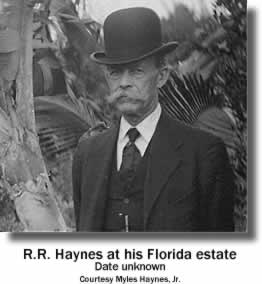 Christmas went by and the chill winds of February came. His mind traveled to his orange grove in Florida, where, also, he had one of his homes. Life seem to be silvered by the Manatee along the shore and hopes seem to take on the green and gold of the orange trees. He had, during the first days, gotten his house in order for himself, his son, Grover, and some friends from Cliffside that he had taken along as guests. “I feel better today than I have for a long time,” he said, speaking to the next-door neighbor and friend. He was back from a delicious outing in his car.

At that instant, death claimed him, with a smile on his face, his family said, that lingered even when he was come back home.