For 25 years since the death of his second wife, he had remained unmarried. His [second] wife lived only about a year, Litia Kelly, of Rutherford County, who died childless and is buried in the Cliffside Cemetery. Said Mrs. Carpenter, oldest sister of Mr. Haynes: “She was highly educated, a Christian wife, and a fine stepmother to us all.” 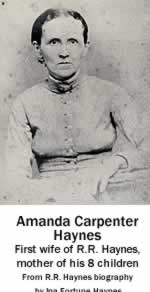 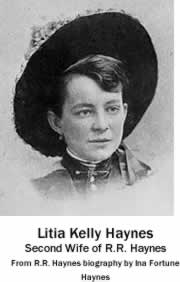 The first wife of Mr. Haynes was the mother of all his children. She was Amanda Carpenter, the daughter of Tennessee Carpenter, who was a farmer living about three miles from Ferry. The great qualities of men most often find their fountainhead in the total equipment of the mother. The mother of Mr. Haynes was, according to the recollection of Mr. Moore and other old friends, business-like and practical, but modest almost to the point of shyness and given to few words. She was gentle and of even temper, meeting situations with poise. She was Sally Walker, daughter of Elijah Walker, a farmer and slaveholder of means and prominence, living not far from Ellenboro, Rutherford County. Then there was “Uncle Billy” Walker and “Uncle Morgan,” the bachelor uncle. When Raleigh Haynes lost his father, Charles H. Haynes, the family had some help from the mother’s folks, as Mrs. Letitia Carpenter, before mentioned, continued to narrate to me in her home in Rutherfordton. “Uncle Morgan,” Mrs. Carpenter was saying, “and Uncle Billy would constantly be coming down with a 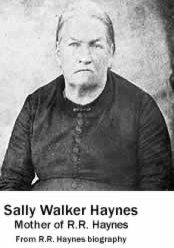 wagon full of provisions and such things as we needed. Then there used to be sent over now and then one of the slaves to do about for us. That’s why I tell you we were not in circumstances that could be called destitute or anywhere near it. We went about and visited, and had visitors, and there was always spare rooms for folks that would come to see us. They and their horses would be well taken care of, and they never went away hungry or without having had a comfortable visit. My mother was a good Baptist and a Christian woman, and my father, though not a member of the church, was a man of soberness and integrity and industry. He ran the farm, paid the taxes, and left only the housework for my mother. That’s the way we got along to marrying age. The old house was built strong of logs, but it was fine and beautiful as was the home at Ferry, where my brother, Raleigh, lived, which was, of course, a finer kind of home. When Raleigh went to Union County to farm, along about 20 years of age, he made some grain and he and his brother, John, whom he took with him, made nine bales of cotton the first year. He would stay in Union from March to July—then come home. He never felt that he had left the old home. He would stay two months, then go back in November after the crops—then, come again for the winter. For all that, both he and John caught the malaria down there and I believe Raleigh never recovered from the effects of it.”

It is true that Mr. Haynes suffered ill health for the last 30 years of his life principally in the shape of impaired digestion but would not slack up the pressure except for the occasional rest. His will power put his sufferings behind him, in the face of the higher duties.

Was a practical dreamer 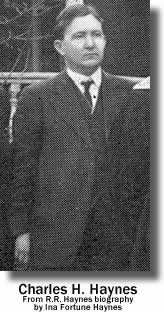 was that he chooses his trusted son, Charles, to see that all was done that he had dreamed before the work was laid down. He had figured that ten years more would be needed for the perfect work, and in his will, one of his lawyers tells me, he directed that his estate be held intact for 10 years in order that Charles H. Haynes, his sole executor, might be able to effect the final result. This young man, educated and having lived in close communion with his father, goes about the great labors left to him with a sort of worship, it seems to me, of the man where thoughts and plans he seems to be trying to translate, with conscientious care, into the performance that his father would have approved.

It is not necessary in this writing to go into the complete details of his undertakings. Many or most of these may be found on another page. My desire here, specially, is to bring out the man, Raleigh Haynes, whose mind seemed like a searchlight on a locomotive moving forward, always under high pressure. It must be noted, however, that in the Cliffside Mills are 900 employees and in the village of Cliffside about 2500 persons. It is with these we have, for the moment, to do. He had finished his mill; he was trying to finish his people into a community of thrift and kindliness. 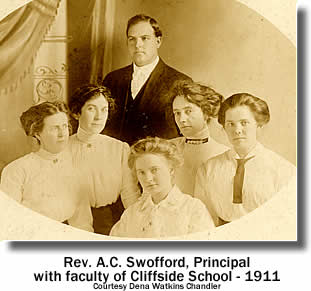 The ample school building had a daily attendance of 350 children, with a principal and five teachers.Mr. Moore, his lieutenant of all work, the man who built the mill, the constructing foreman of this unusual community, built not long ago an attractive residence of modern architecture, with rooms for the five women teachers and a married woman to look after their wants and comfort. Mr. Haynes planned this while he was in the residence he occupied in Asheville as a rest resort. His thoughts went to his young women teachers and their home above noted is the result. That was a part of the soul of this practical dreamer illumining the lives of his kind much as perfume comes pervasively, with every breath, from the lips of a flower.

Then there is the great brick structure, solid and spacious, the company store covering the range of essential human needs. The ice plant is finished. The movie theater is open two nights a week. The library is there with papers and books; the post office, the bank, the garage, the flour mill, the skating rink. But he was not yet done. He had said he wanted a steam laundry and a bakery. A house for the laundry is now building. The church edifices, three in number, Baptist, Methodist and Presbyterian, would be creditable to any town. They are picturesque and substantial. “I want a complete town,” he said in his soul, “not so much for the brick and wood of it as for the furnishings of comfortable facilities for a harmonious community pursuing happiness in the fear of God, and doing the full fair daily duties of womanhood and manhood.”